by Beth Brindle
Prev NEXT
8

Fonzie and the Cunninghams, "Happy Days" 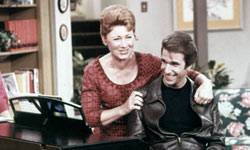 Actors Henry Winkler, as Arthur "Fonzie" Fonzarelli, and Marion Ross as Marion Cunningham, in a scene from "Happy Days," circa 1975.
Fotos International/Getty Images

When "Happy Days" first launched in 1974, Arthur Fonzarelli (Henry Winkler) was a tough-guy biker from a lower-class background, originally conceived as a minor character on the show [source: Lewis]. But as his popularity with viewers grew and his role evolved, his delinquent behavior was increasingly toned down and played more for humor than for conflict, so much so that by 1975 it seemed perfectly reasonable that he would move into the apartment above Howard (Tom Bosley) and Marion (Marion Ross) Cunningham's garage [source: YouTube].

While "Mr. C." tolerated Fonzie's presence only reluctantly at first, the Fonz was soon treated as a trusted member of the family who frequently dispensed his own brand of fatherly wisdom to the squeaky-clean Cunningham kids.