by Beth Brindle
Prev NEXT
10

Ward and June Cleaver, "Leave it to Beaver" 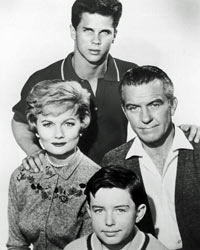 "Leave it to Beaver" placed an utmost importance on the perfect relationship between June and Ward Cleaver.
R. Gates/Getty Images

Its six-year run ended nearly 50 years ago, but thanks to reruns and cable TV, generations of kids have watched Ward and June Cleaver of "Leave it to Beaver" raise their children Wally and Theodore (more commonly known as the Beaver) with just the right blend of kindness and gentle guidance. As parents, we can only dream of maintaining the calm, unflappable competence and good humor that June (played by Barbara Billingsley) and Ward (Hugh Beaumont) exhibit as they help the boys find their way out of scrapes, including one involving a pet alligator the boys have hidden in the basement [source: TV Land].

But the show also placed an utmost importance on the perfect relationship between husband and wife. We never saw June and Ward have a really serious argument. And even though both Ward and June were defined primarily by their roles as parents, June was responsible for identifying problems and bringing them to Ward's attention so he could administer the advice or discipline needed to resolve the situation [source: Lillico].