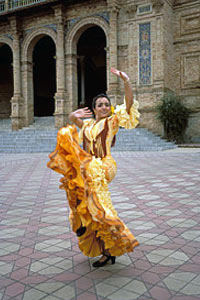 Today, most people refer to Andalusian dress as flamenco, and this traditional clothing is still popular.
David Sanger/Getty Images

Today, many people consider France the center of the fashion universe, but in the 16th century that distinction went to Spain. At the time, Spanish clothiers stitched together rather sober designs making use of the period's heavy fabrics. They then decorated their work with gold and silver thread, bejeweling the fabric with pearls and other gems, an influence left behind by the Moors.

As was the fashion of the time, well-dressed women often wore hoop skirts known as Farthingales. Men wore their hair short, although they donned beards. Black, red and gold were popular colors for both sexes. Women also dressed in a fan-shaped wired collar called a wisk, while men donned a copotain, a high, inverted bell-shaped hat. Most males of means wore loose breeches called Venetians [source: Central Washington University].

Yet, for all its flamboyant rigidness, the Spanish style of dress became outdated, and the capital of style shifted from Spain to Paris. Still, when you think of Spanish fashion, copotains and wired collars do not come quickly to mind. Instead most people are familiar with the Andalusian-style of dress, which many outsiders consider the Spanish national costume [source: Worth].