Customs and Traditions in Spain 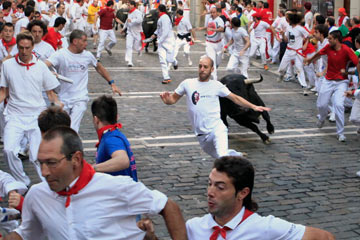 A fighting bull runs behind participants during the Running of the Bulls in Pamplona, Spain. For eight days, bulls run through the historic heart of Pamplona in this fiesta made famous by the 1926 novel "The Sun Also Rises" by Ernest Hemingway.
Pablo Blazquez Dominguez/Getty Images

Some of the first things that might come to mind when a person thinks of a Spanish tradition include the bullfight, the siesta and flamenco dancers. For some, the Running of the Bulls in Pamplona also tops the list. Pamplona, a small city in Spain's northern Basque region, holds its annual Running of the Bulls as part of a religious festival to honor St. Fermin, the patron saint of the city [source: James].

The festival, made famous by Ernest Hemingway in his 1926 classic "The Sun Also Rises," draws thousands each July to Pamplona's narrow streets. The Running of the Bulls dates back to the 13th century, and has gone on continuously since 1592. The run harkens back to the day when residents of Pamplona ran bulls through the city's streets as a way of corralling the beasts inside Pamplona's bullfighting ring [source: James].

But some people don't believe that being chased by a dozen or so half-ton snarling mammals is a good way to spend an afternoon. They'd rather throw tomatoes at one another. Although La Fiesta de Tomatin does not hold the same allure and provenance as Pamplona's bull running, it is a popular tradition nonetheless. The battle takes place about 30 miles [48.28 kilometers] outside of Valencia, home of the sweet and juicy Valencia tomato [source: DonQuijote.org].

While many Spanish traditions date back centuries, the Fiesta de Tomatin is a relative newcomer to Spain. It began 60 years or so ago when a group of friends started a tomato fight in the center of Bunol. Why the fight ensued remains a mystery. Today, the battle, in which combatants fling more than 150,000 tomatoes at one another, coincides with the fiesta for the town's patron saint [source: DonQuijote.org].

For most of the world's Christian children, the most important day of the year is Dec. 25, Christmas. That's when, well, you know the drill. However, in Spain, the most important and best-loved tradition among children is Los Tres Reyes Magos, the day of the Three Wise Men. The Three Wise Men were the Biblical rulers who followed the star of Bethlehem to the birthplace of Jesus. The kings brought with them gifts of gold, frankincense and myrrh. On Jan. 6, Spanish children find gifts inside and outside their shoes [source: DonQuijote.org].

Sport also has a big place in Spanish culture. The most popular spot is futbol, better known in the United States as soccer. However, jai alai is extremely popular. Jai alai resembles squash or handball. Players use curved wicker baskets called cestas to fling a pelota, or ball, against a wall. Spaniards living in the province of Basque played the first jai-alai game nearly four centuries ago, using the walls of churches as their courts [source: National Jai-Alai Association].