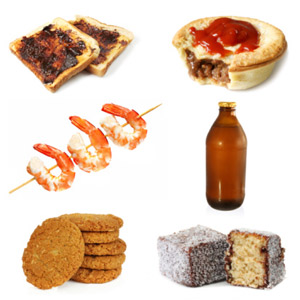 Australian food traditions range from the tasty to the yeasty. Vegemite, anyone?
iStockphoto/Thinkstock

We all know that Australians love their barbecue, and we're also aware that it's called the barbie from the phrase "put another witchetty grub on the barbie."

OK, perhaps larvae are less popular than a request for shrimp, but in terms of Australian food, it's a lot more traditional. The original Aborigine diet (which is referred to as bush tucker, bush being slang for wilderness and tucker for food), included plump witchetty grubs (moth larvae), wombats, turtles and snakes, among other bush animals [source: FIEC]. Native plants, such as spinach, yams and tomatoes, also fed the native tribes. Aborigine damper is a simple, staple bread made of flour and water.

Restaurants and stores have begun to capitalize on a growing bush-tucker trend. However, the British food tradition is strong in mainstream Australian cuisine. Take the the popularity of meat pies, for instance. Australia also has a few dishes that are native, including Lamingtons (a chocolate- and coconut-covered sponge cake) and pavlovas, a meringue dish named after a popular Russian ballet dancer. Vegemite -- a salty, yeast extract spread developed in Australia -- is another national favorite.

While food is all well and good, it's alcohol that Australians proudly see as their real national cuisine -- 83 percent of the population in Australia drinks, although the country's total alcohol consumption is ranked 34th in the world [source: Commonwealth of Australia].

Beer has long been the traditional favorite. But guess what's not Australian for beer? That's right; Foster's is actually much more popular in the United Kingdom than in Australia, where it's largely considered a tourist choice. When you're in Australia, better to order a Victoria Bitter (call it a VB to sound like a real Aussie), or a Toohey.

Australia's wine culture exploded in the mid-'90s, and it's now the sixth largest wine-producing country in the world [source: DFAT]. Interestingly, Australian vineyards are some of the oldest in the world. When disease blighted European vines in the 1800s, only the vines transported to Australia survived.

The most important thing to learn about Australian culture is the "shout," slang for a round of drinks. Etiquette dictates that if a shout is bought for you, you must reciprocate. If you accept a shout and buy only yourself a beer next time, expect dirty looks.

Feeling tipsy yet? Get your head back in the game as we continue on, and learn about Australian recreation and sport.