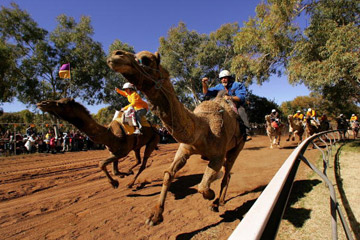 Bet you didn't know that the 8-year-old girls you see on the playground are actually participating in an Aboriginal game that's thousands of years old. Brambahl -- or as we call it, jumping rope-- is a traditional Aborigine game in which two people swing a rope and a third jumps. In Aboriginal games, the jumper performs a series of miming actions (plucking thorns from his or her feet, jumping like a frog).

Other traditional games include buroinjin, a kind of touch football where a team attempts to run a ball across a field without being touched by their opponents. If you're fresh out of kangaroo skin (the traditional material for a ball in Aboriginal tradition), feel free to use a football. And we can't forget the boomerang, a popular toy and sport in Aboriginal culture. When the u-shaped disc is thrown correctly, it returns back to the thrower.

More recently, Australians are wild about their team sports. Australian Rules football (also known as "Aussie rules" or "footy") is an extremely popular national pastime. This rough-and-tumble cross between rugby and soccer lets you run with the ball, albeit with a bounce on the ground every 33 feet (10 meters). A hundred thousand people attend the grand final game every year [source: DFAT].

Rugby is also a popular game in Australia, where the participants show their fortitude by tackling each other and engaging in rough contact without the cushy padding and wimpy (all right, protective) helmets of American football players.

The Melbourne Cup is a horse race that the nation tunes into every year in early November. It's common for people to enter sweeps (a lottery where you're given a randomly drawn horse to bet on), and festivities are held nationwide.

In recent years, Australians are having a laugh at camel races. Extremely brave (or insane) riders attempt to corral their moody (or explosively angry) camels around a racetrack. Camels, which were exported to Australia in the early 1800s to help ease the building of railways and telegraph lines, were eventually released into the wild [source: McMahon]. Estimates say there are up to 150,000 camels still roaming free in Australia [source: Squires]. The races themselves started in the outback in the mid-1900s and have only recently become a wider spectator sport [source: Squires].

For a far more agreeable race, let's sprint to the next page, where we'll find lots more information about Australia and its traditions and culture.