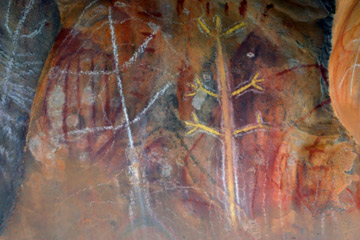 Although we sometimes see "aboriginal" as a reference to any native culture, it's important to note the term "Aboriginal people" should properly refer to the original inhabitants of Australia long before the British settlers arrived in 1788. (The term "Aborigines" is often considered perjorative.) Hungry for land, the Europeans clashed with the indigenous Australians over ownership issues. The tension between the two groups was so fierce that from 1901 to 1971, the Australian government removed Aboriginal children from their families to "civilize" them in white Australian homes. More than 100,000 children were transplanted in the so-called "Stolen Generation" [source: Time].

Aboriginal culture in Australia is thought to be the oldest in the world. The Aborigines are said to have migrated to Australia more than 60,000 years ago, over a now-extinct land bridge from Asia [source: DFAT].

A few key beliefs of Aboriginal culture hold that the Earth is eternal, and the beings that created it are still accessible through rituals. These ancestors made the Earth during a period call The Dreaming or Dreamtime, and that realm can be visited by humans through altered consciousness or dreams. Extremely important to Aboriginal culture is the belief that man, animals, nature and their Dreaming ancestors are all imbued with the same force.

In Aboriginal culture, tjurungas were mythical beings that were represented by a piece of art, usually in the form of carved stone or wood piece. The token held the knowledge of the Dreaming beings and connected man to them. Some rock and cave paintings from Aboriginal culture date back 30,000 years [source: DFAT].

Aboriginal music includes ceremonial songs that recount the mythology of their clan, and their religion and understanding of the world. And lets you think the didgeridoo was invented at your liberal arts college, the instrument was first played by Aborigines and made from tree limbs hollowed by termites.

Ritualized scarring (where the body was cut to form lifelong scars) was also used by Aboriginal people to communicate status, tribe identification or life events.