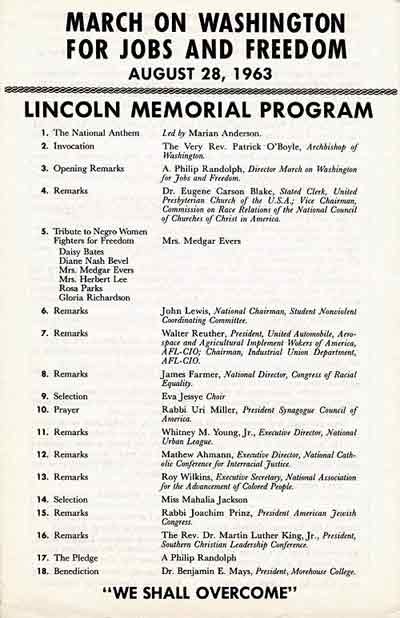 The program from the March On Washington For Jobs And Freedom, August 28, 1963; Dr. King is the 16th speaker.
Photo courtesy National Archives and Records Administration

Although Dr. King is recognized as the face and voice of the civil rights movement, there were a number of other civil rights leaders that were as dedicated and integral to the movement.

Even though you probably cannot call up the sound of his voice or the image of his face, A. Phillip Randolph is considered to be one of the forefathers -- or perhaps the forefather -- of the modern civil rights movement. His work undoubtedly had great influence on Martin Luther King, Jr. In fact, the two often worked together on many direct-action protests, including the famous "March On Washington For Jobs And Freedom."

The idea for the 1963 March On Washington originated with A. Phillip Randolph. Reminiscent of the first march he planned in 1941, Randolph proposed the march to various civil rights leaders in late 1962. At first, his idea was given little, if any, consideration.

Randolph needed the cooperation and involvement of each of "The Big Six." The Big Six consisted of Randolph and the five leaders of the major civil rights organizations:

Eventually, everyone signed on. With the help of Bayard Rustin, civil rights organizer and trusted advisor to Martin Luther King, Jr., the March On Washington became one of the most successful protests of the civil rights movement.

For more information on the Reverend Dr. Martin Luther King, Jr. and related topics, visit the links on the following page.