Browse the article How Kwanzaa Works 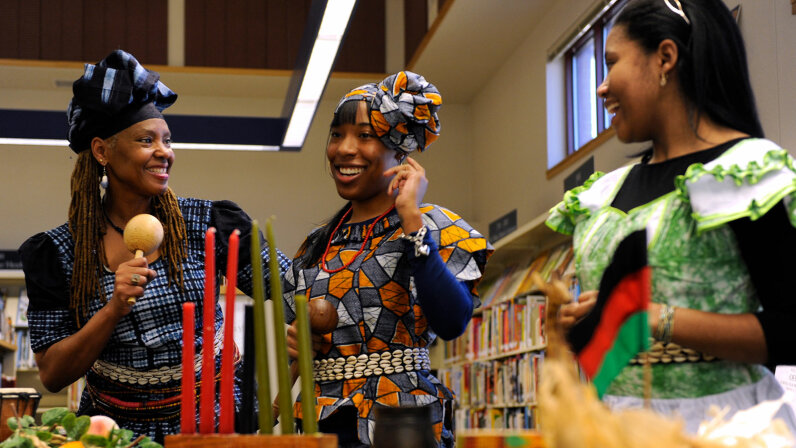 In late December, the holiday season is in full swing. Christians are celebrating Christmas, which commemorates the birth of Jesus. Jews are observing Hanukkah, which celebrates the reclamation of their holy temple in Jerusalem. These holidays are joyful celebrations in which families and friends come together to share food and gifts.

People of African descent have their own December celebration in which they gather with loved ones to reaffirm the bonds of family and culture, as well as to share food and exchange gifts. It is called Kwanzaa, and, although it is relatively new compared to other holidays, it has become an important facet of practicing African culture on other continents.

In this article, we will look at the roots of Kwanzaa, discover the significance of its symbols and learn about the unique traditions that make up the Kwanzaa celebration. 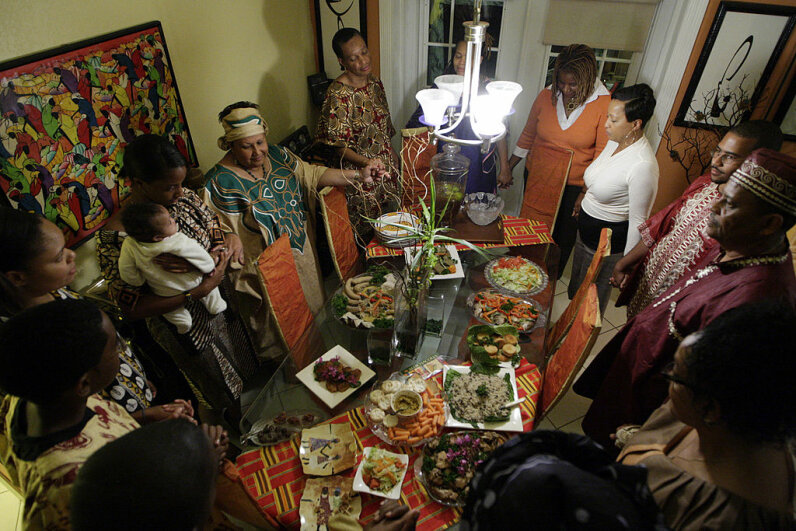 Kwanzaa is a Pan-African holiday, meaning that it is meant to unite people of African descent, wherever in the world they live. It runs from December 26 through January 1. Unlike Christmas and Hanukkah, which are religious holidays, Kwanzaa is a cultural holiday (in fact, many people celebrate both Kwanzaa and Christmas). Over its seven days, people of African descent come together to celebrate family, community, culture and the bonds that tie them together as a people. They also remember their heritage, give thanks for the good things they have and rejoice in the goodness of life.

Seven is an important theme of Kwanzaa. The holiday lasts for seven days -- one day for each of its seven guiding principals. There are seven basic symbols used in the Kwanzaa ceremony -- one of which consists of seven candles -- and each symbol ties into one or more of the seven guiding principles.

Although Kwanzaa has only been around for a few decades, its roots trace back to ancient African harvest celebrations. The name "Kwanzaa" comes from the Swahili phrase, "matunda ya kwanza," which means "first fruits." Many of the first-fruits celebrations -- for example, the Umkhost of Zululand in Southern Africa -- were also seven days long.

Kwanzaa was the brainchild of Dr. Maulana Karenga, a professor in and chair of the Department of Black Studies at California State University and a former civil rights activist. He introduced Kwanzaa in 1966, a time when African Americans were struggling for equal rights, as a means to help them connect with their African values and traditions. Dr. Karenga also wanted Kwanzaa to serve as a bond to unify African Americans as a community and as a people. He chose the dates -- December 26 to January 1 -- to coincide with the Judeo-Christian holiday season, which was already a time of celebration. And he chose a name that comes from the Swahili language because Swahili is spoken by a large number of East African people.

In the days of the early harvest celebrations, Africans would gather to celebrate their crops and reaffirm their bonds as a community. They would offer thanks to their creator for a bountiful harvest and a plentiful life. They would honor their ancestors and stress their commitment to their culture as well as celebrate their culture and community. The harvest ideals inspired Dr. Karenga to come up with the Seven Principles of Kwanzaa.

How Kwanzaa Got Its Name

There is a story that goes like this: During one of the first Kwanzaa celebrations, there was a children's pageant. Each of six children held up one of the letters of the word "Kwanza," which is how the holiday was then spelled. But a seventh child, with no letter to hold, was left in tears. Someone at the event gave the child an extra "a," and the holiday was thus renamed "Kwanzaa."

Kwanzaa centers around Seven Principles, Nguzo Saba (En-GOO-zoh Sah-BAH), which represent the values of family, community and culture for Africans and people of African descent to live by. The principles were developed by Kwanzaa founder Dr. Maulana Karenga based on the ideals of the first-fruit harvests.

The principles are illustrated during the Kwanzaa festivities by the Seven Symbols. 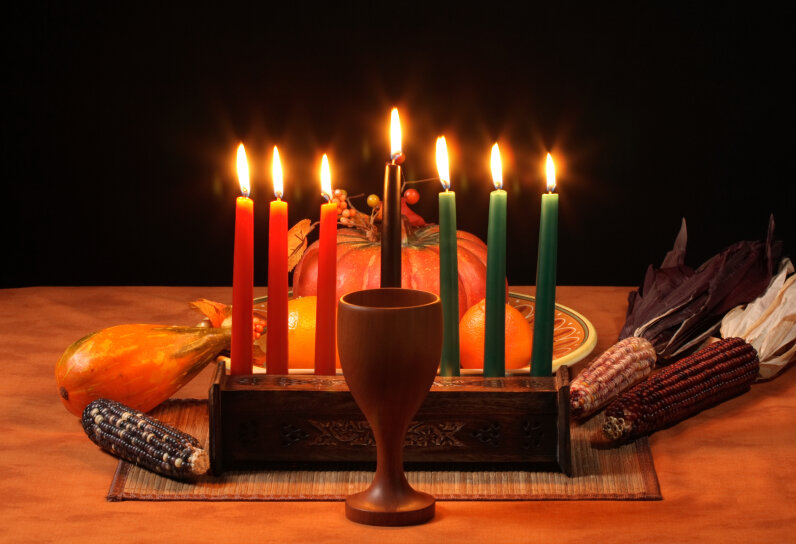 Seven symbols are displayed during the Kwanzaa ceremony to represent the seven principles of African culture and community.

Mkeka (M-kay-cah) - This is the mat (usually made of straw, but it can also be made of fabric or paper) upon which all the other Kwanzaa symbols are placed. The mat represents the foundation of African traditions and history.

Mazao (Maah-zow) - The crops, fruits and vegetables, represent traditional African harvest celebrations and show respect for the people who labored to grow them.

Kinara (Kee-nah-rah) - The candle holder represents the original stalk from which all African ancestors came. It holds the seven candles.

Mishumaa (Mee-shoo-maah) - In the seven candles, each candle represents one of the seven principles. The candles are red, green, and black -- symbolic of the African people and their struggles.

Muhindi (Moo-heen-dee) - The corn represents African children and the promise of their future. One ear of corn is set out for each child in the family. In a family without children, one ear is set out symbolically to represent the children of the community.

Kikombe cha Umoja (Kee-com-bay chah-oo-moe-jah) - The Unity Cup symbolizes the first principle of Kwanzaa -- the unity of family and of the African people. The cup is used to pour the libation (water, juice or wine) for family and friends.

Zawadi (Sah-wah-dee) - The gifts represent the labors of the parents and the rewards of their children. Gifts are given to educate and enrich the children -- they may include a book, a piece of art or an educational toy. At least one of the gifts is a symbol of African heritage. 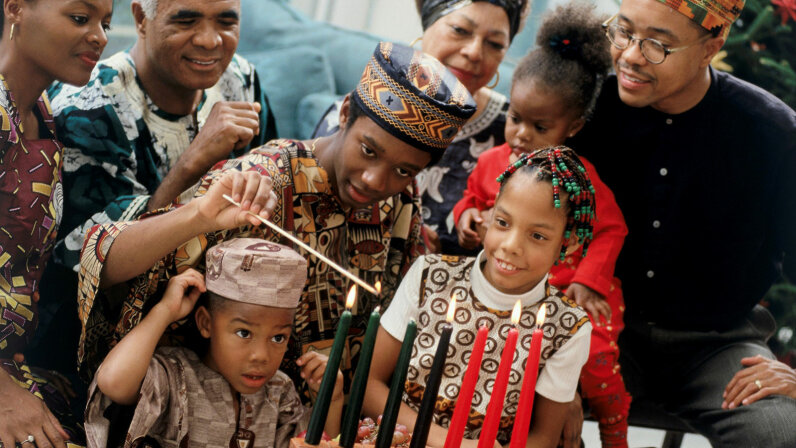 Kwanzaa is a time to celebrate family and African heritage. Purestock/Thinkstock

On the first day of Kwanzaa, December 26, the leader or minister calls everyone together and greets them with the official question: "Habari gani?" ("What's happening?"), to which they respond with the name of the first principle: "Umoja." The ritual is repeated on each day of the Kwanzaa celebration, but the answer changes to reflect the principle associated with the day. For example, on the second day, the answer is, "Kujichagulia."

Next, the family says a prayer. Then they recite a call for unity, Harambee ("Let's Pull Together"). The libation is then performed by one of the older adults, and one person (usually the youngest child) lights a candle on the Kinara. The group discusses the meaning of that day's principle, and the participants may tell a story or sing a song related to the principle. Gifts may be given one per day, or they may all be exchanged on the last day of Kwanzaa.

The Kwanzaa feast is held on the evening of December 31. The feast is not just about food -- it is also a time to sing, pray and celebrate African history and culture.

January 1, the final day of Kwanzaa, is a time for reflection, both individually and as a group. People ask themselves, "Who am I?" "Am I really who I say I am?" and "Am I all I ought to be?" The final candle in the Kinara is lit, and then all the candles are extinguished, signaling the end of the holiday.

In the following sections, we'll take a closer look at the elements of the Kwanzaa celebration. 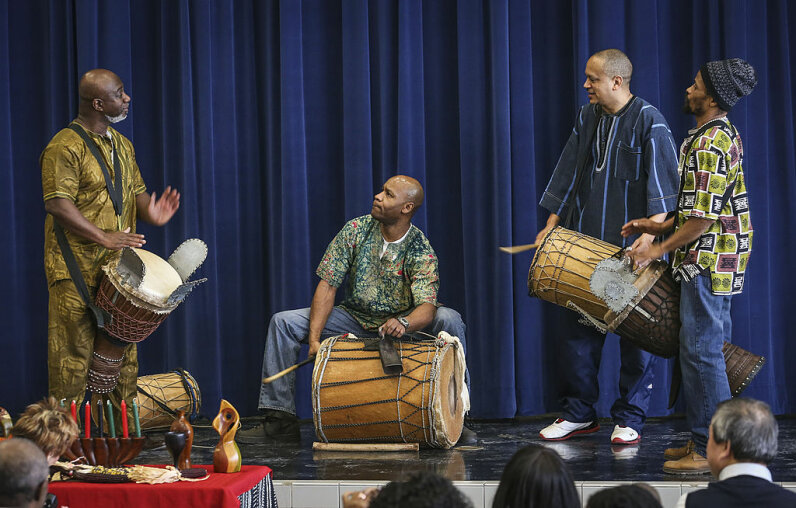 Millions of Africans -- not only in America but all over the world -- celebrate Kwanzaa each year. They come together with family and friends to honor African ancestors and traditions and look forward to their future as a people. They gather in homes, in schools, in churches and in community centers.

The official colors of Kwanzaa are black, red, and green. These colors have always had significance to Africans (they are the colors of the African flag), but they were introduced to African Americans by Marcus Garvey, a black nationalist leader in the early 20th century. The color black stands for the African people; red represents their struggle (blood); and green is a symbol of their future. Most Kwanzaa decorations are made in the holiday's symbolic colors.

People use a variety of decorative items to make their homes feel festive during Kwanzaa. These include baskets, African art, posters, the African flag and harvest symbols. The most prominent feature in the house is a table spread with the mat (Mkeka), upon which are displayed the other symbols of Kwanzaa:

Now let's see what goes on during the Kwanzaa feast.

Kwanzaa gifts always include a book, which represents the value of learning, as well as at least one symbol of African heritage.

On December 31, observers hold a great feast, or Kwanzaa Karamu. The feast is about more than food -- it also is a forum for cultural expression that includes music, dance and readings.

The food served during Kwanzaa is a blend of Caribbean, African and South American flavors. Some popular dishes are fried okra, plantains, fried chicken, black bean soup, baked ham and gumbo. A large mat (Mkeka) is placed in the center of the room, and all of the food is prominently displayed on it.

For more information on Kwanzaa and related topics, check out the links on the next page.

For the Motherland, cradle of civilization.

For the ancestors and their indomitable spirit.

For the elders, from whom we can learn much.

For our youth, who represent the promise for tomorrow.

For our people, the original people.

For our struggle and in remembrance of those who have struggled on our behalf.

For Umoja, the principle of unity, which should guide us in all that we do.

For the creator who provides all things great and small.