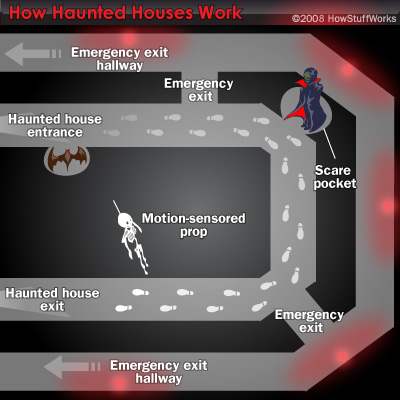 The groundwork for a frightening haunted house experience lies in design. Most haunts are designed as mazes -- guests can find their way through, but there must be enough twists and turns so that they can't anticipate what's coming next.

­Two factors that impact haunted house design are throughput and scaring forward [source: Glenn]. Throughput is essentially a haunted house's productivity standard. On high-traffic nights, managers want to move as many people as possible through the attraction in the shortest amount of time, keeping lines down and customers happy. Throughput also helps haunt owners figure out the number of customers they need to get through each night in order to make a profit at the end of the season. For instance, to get 500 people through an attraction in a single night, one haunt owner calculated that groups of six entering the haunt every 25 seconds would meet that goal [source: Glenn]. If you bump the throughput much higher than 25 or 30 seconds, you risk breaking one of the cardinal rules of haunted house design: Customers must never see those people who have gone in before them.

Maximizing throughput without diminishing the quality of the entertainment is a balancing act. If groups race through the haunt, they won't be as scared, which could lead to mediocre reviews. To get both the shocks and the speed, here's where "scaring forward" comes in. When a haunted house designer plans where actors or special effects will appear, the goal is to scare visitors along a path rather than causing them to retreat backward. This brings up an insider tip, thanks to Ricky Dick of Castle Blood: If you have a low scare tolerance and don't want goblins jumping out in your face, walk near the front of the group. Thanks to the necessity of scare forward, many of the special effects and actors are cued from the side or the back of the group to keep folks moving along their panicky path.

The time it takes customers to walk through a haunted attraction will differ with people and the attraction itself, since some are larger than others. The 13th Gate in Baton Rouge, La., which was ranked the scariest haunted attraction in the United States in 2008 by HauntWorld Magazine, lasts between 30 minutes to an hour. And of course, in case someone becomes too scared or injured to continue, haunted houses usually design multiple exits for emergency situations and actor mobility.

Proper haunted house design can also help owners stretch their resources. Smaller haunts may "double" or "triple" their actors by placing them in areas of the haunt where they can jump out from multiple directions and startle different groups of customers [source: Dick]. Those hiding places for actors are referred to as scare pockets. For nonmobile haunted houses, a well-designed maze could save on renovating costs each year. Haunt owners usually change the overall theme and at least some of the set so returning customers have a fresh experience each year. Ricky Dick estimates that he alters around 20 to 25 percent of the haunt's layout each year, but nothing too drastic. Netherworld Haunted House in Atlanta will usually undergo an extensive remodeling, retaining some of the same scare tactics but used within a different theme and layout.

In addition to cost savings and positive customer experience, a well-designed haunt will also elicit the best scares.