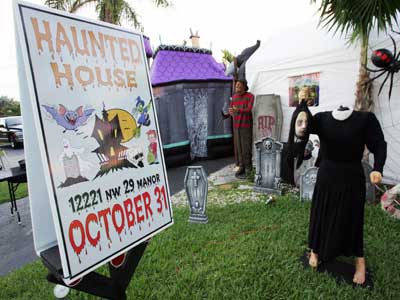 ­Word has spread in recent y­ears about a massive haunted house that will scare you so badly you'll be reduced to a quivering lump on the floor. It contains 13 fake-blood-soaked, cobweb-filled, ghost-packed levels that the owners bet will cause most mortals to flee for the nearest exit. In fact, the proprietors are so confident that their haunted house is the most terrifying thing to hit Halloween since Jason and Freddy, they'll return your admission fee if you can make it all the way through.

Of course, no one has actually been to such a place, which would have insurance agents and fire marshals shaking in their boots. That's because this haunted house of mythical proportions is as much a Halloween confection as candy corn.

­In reality, a haunted house with a money-back guarantee due to potentially hazardous obstacles might not be very pop­ular with the public. Granted, people love to get scared -- but only when there's no physical risk involved. Think about eating a calorie-free bacon-cheeseburger: You get the satisfaction without the love handles. Likewise, when you visit a scary haunted house, your body releases adrenaline (a process detailed more thoroughly in How Fear Works) without the stress of being in real danger. For thousands of people every year, that adrenaline rush is worth around $15, or whatever cost haunted houses charge.

Staged haunted houses -- as opposed to the real thing, those actual houses believed to be haunted by the dead -- are a relatively new form of holiday entertainment in the United States. Kids have only been trick-or-treating since 1939, and it didn't really pick up until the 1950s [source: Rogers]. With the rise in urban crime and the growing association of Halloween with teen vandalism in the following decades, local governments and organizations wanted alternatives to the pumpkin-tinged tomfoolery.

­For all the variety among haunted houses, or haunted attractions in industry speak, many fundamentals remain the same. After all, they all share a common goal at the end of the night -- scare the pants off everyone who walks through.

Special thanks to Ricky Dick of Castle Blood haunted attraction near Pittsburgh and Ben Armstrong of Netherworld Haunted House in Atlanta.