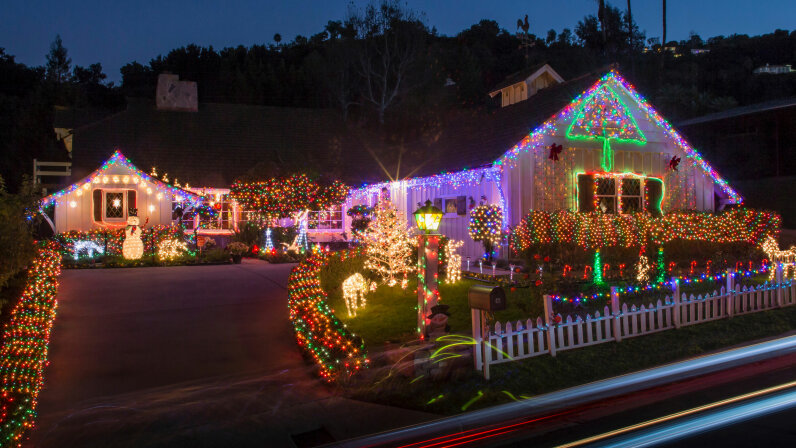 This homeowner shows off his Christmas decorations. Rob Lewine/Getty Images

Christmas lights are a big part of the holiday season. As November and December roll around, you might see strands of lights everywhere -- on Christmas trees, houses, shrubs, bushes and even the occasional car! Have you ever wondered how these lights work? Why is it that if you pull out or break one of the bulbs, the whole strand of lights goes out? And how do they create the lights that sequence in different color patterns?

­If you were to go back in time 30 or 40 years and look at how people decorated their houses and trees with lights, you would find that most people used small 120-volt incandescent bulbs. Each bulb was a 5- or 10-watt bulb like the bulb you find in a night light. You can still find strands of these bulbs today, but they aren't very common anymore for three reasons:

The one advantage of this arrangement is that a bulb failure has absolutely no impact on the rest of the bulbs. That's because a 120-volt bulb system places the bulbs in parallel, like this:

You can have two, 20 or 200 bulbs in a strand that is wired in parallel. The only limit is the amount of current that the two wires can carry.

In this article, we'll look at Christmas lights so you can understand everything about them, starting with energy-saving Christmas mini-lights. 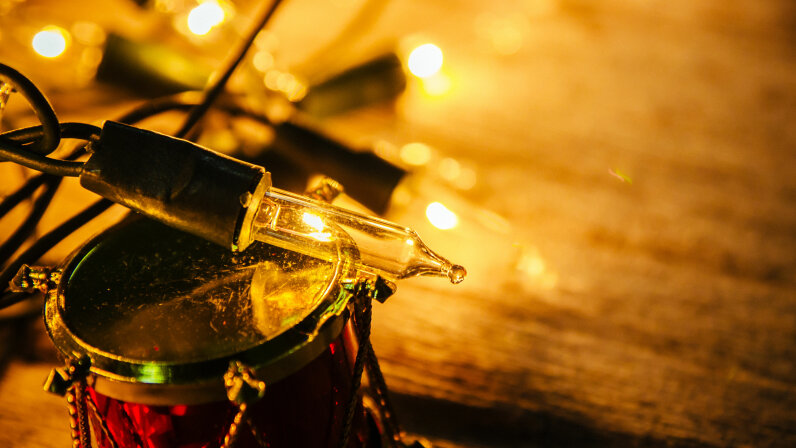 The 1970s saw a revolution in decorative lighting: Mini-lights were introduced. They now dominate the market when it comes to strands of lights. A mini-light is a small, 2.5-volt incandescent bulb that looks like this:

These bulbs are not much different from any incandescent flashlight bulb (see below for details).

Given that you are plugging these 2.5-volt mini-lights into a 120-volt outlet, the obvious question is, "How can that work?"

The key to using these small, low-voltage bulbs with normal house current is to connect them in series. If you multiply 2.5 volts by 48, you get 120 volts, and originally, that's how many bulbs the strands had. A typical strand today adds two more bulbs so that there are 50 lights in the strand -- a nice round number. Adding the two extras dims the set imperceptibly, so it doesn't matter. The lights in a 50-bulb strand are wired like this:

You can now see why mini-light strands are so sensitive to the removal of one bulb. It breaks the circuit, so none of the bulbs can light! When mini-lights were first introduced, any bulb burning out would darken the entire strand. Today, the bulbs can burn out and the strand will stay lit, but if you pop one of the bulbs out of its socket, the whole strand will go dark. This difference in behavior occurs because the new bulbs contain an internal shunt, as shown here:

Although you can buy simple 50-bulb strands like the one shown above, it is more common to see 100- or 150-bulb strands. These strands are simply two or three 50-bulb stands in parallel, like this:

If you remove one of the bulbs, its 50-bulb strand will go out, but the remaining strands will be unaffected. If you look at a strand wired like this, you will see that there is a third wire running along the strand, either from the plug or from the first bulb. This wire provides the parallel connection down the line.

The big advantages of mini-bulb strands are the low wattage (about 25 watts per 50-bulb strand) and the low cost (the bulbs, sockets and wire are all much less expensive than a 120-volt parallel system). The big disadvantage is the problem of loose bulbs. Unless there is a shunt in the socket, a loose bulb will cause the whole 50-bulb strand to fail. It's not hard to have a loose bulb because the sockets are pretty flimsy. There are testers on the market now that can help find loose bulbs faster, and they only cost $3 to $4. You point the tester at each bulb and it tells you which bulb is loose (see this Question of the Day for details).

In the next section, we'll take a look at how blinking lights work. 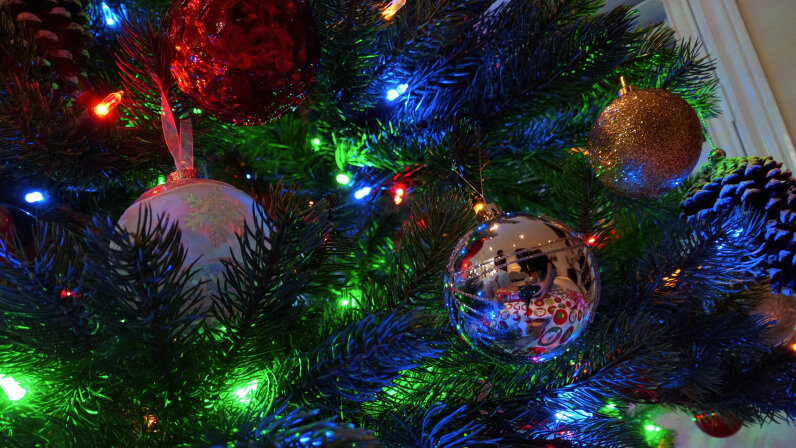 Most pre-lit Christmas trees are programmable, allowing the user to change the color of the lights and other functions. Victoria Viola/ EyeEm/Getty Images

There are two different techniques that are used to create blinking lights. One is crude and the other is sophisticated.

The more sophisticated light sets now come with 16-function controllers that can run the lights in all sorts of interesting patterns. In these systems, you typically find a controller box that is driving four separate strands of mini-bulbs. The four strands are interleaved rather than being one-after-the-other. If you ever take one of the controller boxes apart, you will find it is very simple. It contains an integrated circuit and four transistors or triacs -- one to drive each strand. The integrated circuit simply turns on a triac to light one of the four strands. By sequencing the triacs appropriately, you can create all kinds of effects! Patent 4,215,277 is a good one to read if you want to learn more about sequencers.

If you hook a mini-light bulb up to a normal AA battery, the bulb will light just like a flashlight bulb. It will be dim, however, because the bulb expects 2.5 volts rather than the 1.5 volts the battery is generating. You can put two batteries together to create 3 volts, or you can hook the bulb up to a 9-volt battery as shown here.

Because you are driving the bulb at a significantly higher voltage than it expects, it will burn extremely brightly and will not last very long (perhaps 30 minutes or an hour).

For more information on Christmas lights and all sorts of related topics, check out the links on the next page. 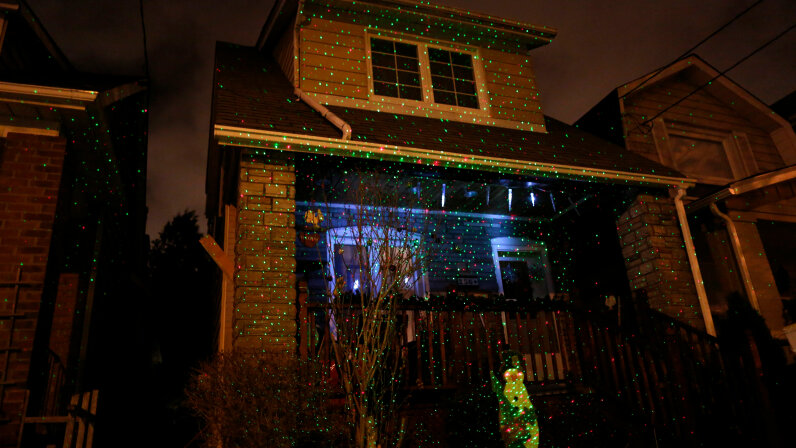 Holiday projectors are a quick and easy way to decorate the outside of your house for Christmas. Marta Iwanek / Contributor/Getty Images

Henry Joseph Round was credited with the discovery of the light-emitting diode (LED) in 1907, but it wasn't until the 1960s that LEDs were used commercially. LED lights don't have filaments that will burn out and they generate light without adding heat. LEDs are illuminated by electrons moving in a semiconductor material. The first LED Christmas lights were sold in 1998, and by the mid-2010s, Christmas trees at both the U.S. Capitol and Rockefeller Center had been lit using only LED lights [source: Gardner]. Even though they cost consumers more upfront, LED lights use 80 percent less energy and last much longer than traditional incandescent lights [source: Wood and Gerrity]. An added benefit is that these lights are often programmable, allowing users to change the color of the lights and select different blinking modes. They also come in a variety of shapes and styles.

Laser projectors are no longer just for night clubs. Now your house can get in on all the kaleidoscopic fun! Holiday projectors first appeared on the U.S. market in 2015 [source: Kavilanz]. When these projectors are pointed at a house, they create special effects like falling snow or flying reindeer. Here's how they work: Light is passed through a lens, which magnifies and displays a picture. Unlike traditional projectors which use light bulbs, laser projectors use LEDs to produce the light [source Poretsky]. Holiday laser projectors are popular because they're easier to set up than string lights, especially when decorating roof tops.

However, these projectors can disrupt air traffic if they aren't used properly. As of June 30, 2017, there were 2,933 laser incidents involving aircraft reported to the FAA, less incidents than in 2016, but more than in 2015 [source: Patrick Murphy]. When lasers hit airplanes, the pilot and other crew members may experience temporary blindness, headaches and watery eyes. It's important that consumers point these projectors directly at their homes, not at the sky.