by Mark Mancini Oct 29, 2019
Paa Joe is a renowned master craftsman who creates fantasy coffins as part of Ghana's tradition of abebuu adekai, which started in the 1950s. Photo courtesy of Benjamin Wigley, director of "Paa Joe and the Lion"

Renowned for its amazing wildlife sanctuaries, the Republic of Ghana is often called West Africa's "golden child." International companies like Google, Guinness and Coca-Cola have set up facilities in Accra, the nation's capital city.

But Accra is also known for another industry — this one more homegrown. And it's, well, a business so unique that it's caught the eye of death care providers all over the world.

You see, in Ghana there's big demand for big coffins, oftentimes shaped like chili peppers, taxi cabs, even Nike sneakers — just about any object imaginable. Each one's a vibrant work of art, requiring skillful carpentry. In the Ga language, the funerary boxes are called "abebuu adekai," which means "proverbial coffins." English-speakers know them by another name: "fantasy coffins."

The practice of building fantasy coffins is effectively limited to Ghana and Togo (a neighboring country). According to Genevieve Keeney, this region has a corner on the highly specialized artform. A licensed embalmer, Keeney's the president and chief operating officer of the National Museum of Funeral History (NMFH) in Houston, Texas.

Keeney says she's never "come across or been presented with" any parallels to fantasy coffins from other parts of the globe. "I get made aware of quite a lot of interesting rituals and customs and have yet to hear of anything close," she says.

Her museum houses the largest collection of fantasy coffins outside Ghana. Altogether, the NMFH has a dozen on permanent display, their shapes ranging from a Mercedes-Benz to a red-legged crab. Similar coffins have been showcased at the University of Iowa, the Brooklyn Museum and the National Museum of Modern Art in Paris, France.

This pink fish fantasy coffin carved by Ghana's Eric Kpakpo Addotey is an example of one often used to bury fishermen and fishmongers. These fantasy coffins are designed to reflect the personality, career, accomplishments or unfulfilled dreams of the deceased.
Nana Kofi Acquah/Getty Images for Lumix

The ornate coffins reflect traditional beliefs about ancestry and death. Modern fantasy coffins were devised by the Ga people, who are members of the greater Accra region's Ga-Adangme ethnic group. In their culture, dying is seen as a period of transition. It's also thought that the deceased have the power to affect living relatives from beyond the grave. Keep your loved ones happy post-mortem, and they might grant you some blessings down the road.

So making a good impression on newly dead family members is considered hugely important. That's where fantasy coffins come in.

Traditionally, it was common practice to bury a corpse with some personalized trinket — like a miniature canoe — that represented the individual's former career. Back in the 20th century, an Accra-area carpenter by the name of Seth Kane Kwei did something similar, but on a much larger scale.

Kwei was born in 1922 and by all accounts, he had an entrepreneurial spirit. When Kwei was a young man, he persuaded the family of a local chief who died unexpectedly to bury the leader in a cocoa pod-shaped palanquin he had ordered just before his death. Then in the 1950s, Kwei's grandmother died. Remembering the chief, he crafted an elaborate coffin for her in the shape of an airplane, as a way of celebrating her lifelong interest in aviation.

The project changed his life. Soon, Kwei was approached by mourning clients requesting personalized coffins whose designs would tell the stories of their occupants. One early customer commissioned a boat-shaped unit for his dead father, a fisherman.

And the rest was history.

This fantasy coffin resembling a lion is on display at the Artists Alliance Gallery in Accra, Ghana.
Wikimedia

Going Out in Style

Kwei probably wasn't the sole inventor of fantasy coffins as we now know them. Yet he undoubtedly deserves credit for popularizing the artistic funerary boxes.

Artistic coffins did become the specialty at Kwei's workshop, where his skills were passed on to his sons and grandson. Some of Kwei's other apprentices, like the carpenter Paa Joe, would go on to found competing fantasy coffin businesses in Accra. Paa Joe is now considered one of Ghana's most renowned coffin artists, and his works have been exhibited in New York City's premier American Folk Art Museum.

Given their often-elaborate shapes, it's easy to forget that — first and foremost — the caskets must be functional. "The body and coffin are buried in the ground after the funeral service," Keeney notes. On the Kane Kwei Carpentry Workshop's official website, patrons are told that a fantasy coffin can usually be completed within a week or two of the down payment.

Building materials vary. Most fantasy coffins are intended for use in funerals. But some are tailor-made display pieces built to wow the guests at foreign art galleries and museums. The latter tend to be made of hard woods like African mahogany. A coffin of this sort can easily sell for $3,000 to more than $9,000. Meanwhile, funeral-ready coffins will consist of cheaper, lightweight woods.

Regardless of where the coffins are headed, they all need to be sanded, painted and re-sanded before the client hauls them off. As for the shapes, that's up to the buyers. A Delaware man once asked Eric Adjetey Anang (Seth Kane Kwei's grandson) for a coffin modeled after a Leinenkugel-brand beer bottle. Other artists have built human-sized wooden cameras, eagles and hairdryers for their customers.

In Ghana, bodies often spend months or even years inside refrigerated storage units while the family of the deceased organizes the funeral. After the date and time are set, and the coffin's paid for, the event can proceed. Ghanaian funerals are lengthy, expensive affairs that can last for three full days at a time.

Apart from the guests, a typical list of attendees can include musicians, DJs, photographers, caterers and bartenders. Visitors can help the family recoup some of the costs by raising funds on-site — while also making time to dance the night away. 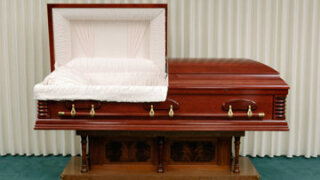 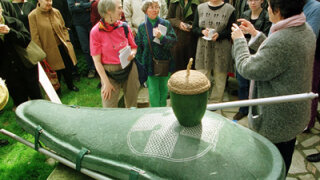 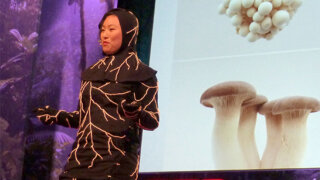