by Dave Roos Nov 11, 2019
Retired Air Force Master Sgt. Frederick Edison, left, presents a folded flag to Laurie Ward, right, the niece of U.S. Air Force Col. Ruth A. Lucas during a funeral service for Lucas at Arlington National Cemetery in 2013. Lucas was the first female African American to ascend to the rank of colonel in the Air Force. Matt McClain/ The Washington Post via Getty Images

Sgt. 1st Class Bou Harrold remembers the first time he participated in an honor guard at a funeral. It was for his grandfather's funeral, where he also played taps on the trumpet.

"It meant a lot to me and I know it meant a lot to the family, because his service was very important to him," says Harrold. "When you talk to funeral directors, they say it also helps to provide families with some closure. Everyone's always really appreciative of what we do."

Military honors are a final act of recognition and respect for those who served in the United States armed forces and include the presentation of a carefully folded American flag and the ceremonial playing of taps. Under U.S. law, military funeral honors are provided, upon request, for every deceased veteran of the Army, Navy, Air Force, Marines, Coast Guard, National Guard and Selected Reserve. This law was enacted in 1999.

Do you have to have fought in a war to be eligible for military funeral honors? No, says Jessica Maxwell, a spokesperson for the U.S. Department of Defense. All individuals who were active duty in any branch of the military and received an honorable or general discharge, or died while active duty, are qualified to receive funeral honors. Under U.S. law, that service to your country defines you as a "veteran."

There are, however, two different types of military honors that are provided for veterans, depending on whether they were career military and the circumstances of their death.

Harrold explains the difference between the two types of military honors: basic and full.

Basic honors are provided for veterans who served in any branch of the military, in wartime or peace, and were then discharged honorably from the military. Basic honors include a detail of at least two members of the armed forces, one of whom must be a member of the branch in which the deceased veteran served.

During the funeral service, taps (a bugle call played at military funerals as well as flag ceremonies) must be played. Then two uniformed individuals ceremoniously fold and present an American flag to the next of kin. The flag is folded in a very precise way so it ends up in a triangle with only the blue field visible.

Harrold, who has participated in honor guards at more than 1,200 funerals, says there's rarely a dry eye during taps and the presentation of the flag.

He recites from memory the speech that accompanies the presentation of the flag to the surviving spouse or other loved one: "On behalf of the president of the United States, the United States Army and a grateful nation, please accept this flag as a symbol of our appreciation for your loved one's honorable and faithful service."

"When you present the flag to the next of kin, you're going to get the brunt of the emotion," says Harrold. "There's only a foot of space between the two of you and you're trying to make it meaningful to the individual."

Taps is played by a live bugler when available or else by a "ceremonial bugle," a nickel bugle that contains a special insert hidden inside the bell of the instrument. "We push a button and it sounds a recording of taps," says Harrold.

With hundreds of military funerals each year, live buglers are in high demand. The volunteer organization Bugles Across America recruits male or female buglers (plus trumpet, cornet and flugelhorn players) to play live taps at funerals, and now counts 4,000 volunteers in all 50 states.

Full military honors come in modified and "complete" versions. Modified full military honors (or retiree honors) are provided for any veteran who retired from the military — meaning they served a minimum of 20 years in active duty — or who died during active duty in noncombat-related circumstances. In both of those cases, says Harrold, modified full military honors include the folding and presentation of the flag and the sounding of taps, plus pallbearers and a ceremonial, three-volley rifle firing. The firing party consists of a minimum of three riflemen and up to seven, plus a firing commander.

If a service member is killed in combat, says Harrold, he or she will receive full military honors, which includes everything mentioned above plus a six-person flag folding, during which the flag that was draped over the coffin is lifted by the six pallbearers and folded in unison. The coffin may also be carried on a horse-drawn caisson (wheeled cart). Commissioned officers and Medal of Honor recipients are also eligible for full honors.

Funeral services were held at Arlington National Cemetery in 2013 to remember four missing U.S. Navy sailors from the Vietnam War who were killed when their aircraft was shot down over North Vietnam in 1967. They received full military honors.
Nikki Kahn/The Washington Post via Getty Images

Harrold explains that the flag that is folded and presented to the next of kin in all military honors ceremonies isn't a standard flag. It's a special 5-by-9 foot (1.5 by 2.7 meter) cotton flag that's long enough to be folded exactly 13 times into a triangle. According to tradition, the 13 folds have religious and patriotic significance.

Even though the military is only required to provide basic honors for soldiers who were honorably discharged after temporary military service, Harrold says that he works with 50 veterans organizations across Idaho to supplement the service with a firing party or pallbearers, if the family requests it.

Requesting Military Honors for Your Loved One

The funeral home is typically the one to initiate a request for military honors. As part of the process, the military requires proof of service. This is normally a discharge document known as a DD Form 214. If families no longer have the original, they can request a free copy through the Department of Defense. There's even a same-day emergency request line.

All honor guard soldiers receive three days of training on the basic funeral honors and a weeklong training to perform the full honors. Harrold says they'll rehearse an hour or more before every funeral in order to provide the best service possible.

While the members of the honor guard are paid for their service, it's completely free to the families of the deceased.

Now That's Cool
Honor guard members remove their name tags when serving at funerals. "It's not about us as individuals," says Harrold. "It's about that veteran."

Here's Why Macadamia Nuts Are So Delicious and So Crazy Expensive 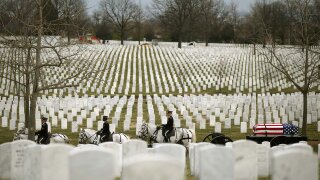 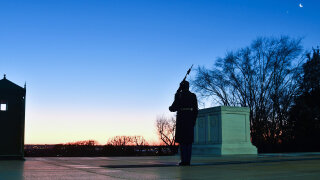 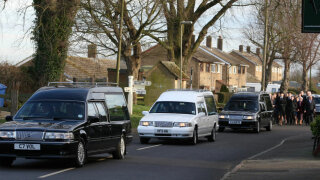