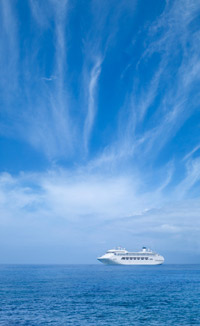 A cruise ship in the open ocean follows the laws of the flag it flies under.
Brad Wilson/Taxi/Getty Images

In 2006, a woman onboard a Royal Caribbean cruise ship sailing the Mexican Riviera reported being raped in her stateroom. She immediately returned to Los Angeles, where two FBI agents took her statement a week later, and told her there was nothing they could do. Ultimately, this case prompted the following year's congressional hearing.

International maritime law requires that cruise ships take every possible measure to provide safe passage. But when something goes wrong, jurisdiction is difficult to sort out.

At the time of the alleged rape, the ship was in international waters, but Royal Caribbean is registered in Liberia and the ship was docking in Mexico through the voyage. The cruise line noted 66 cases of alleged sexual assault between 2003 and 2005, without a single one prosecuted successfully [source: KCRA].

Because maritime law is so difficult to clarify (in part because every country has its own version of it), most cases of cruise ship crime are decided on a case-by-case basis. Law on a cruise ship (or any other ship) starts with the flag the ship is flying under. A ship flies the flag of the country where it's registered, and, in general, the laws onboard a ship are the laws of that country. However, when figuring out which laws apply on a sea vessel, territory also must be taken into consideration. Legal jurisdiction on the sea goes something like this [source: Justia]:

This can all be bad news for the victim of cruise ship crime. But for the millions of people who take a cruise so they can engage in all the good-natured debauchery they want, the legal freedom of the high seas is actually good news. After all, if U.S. law applies on a U.S.-registered ship, how can that ship allow gambling? It's all about international waters.