That's a Lot of Bull 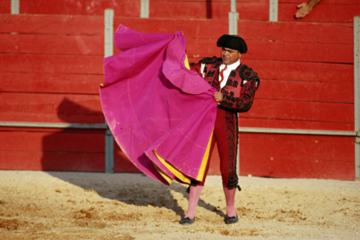 Bulls respond to the movement of the bullfighter's cape, not its color.
Joe Patronite/Riser/Getty Images

Matadors, matadoras and their assistants fight four-year-old specially bred bulls weighing approximately 1,300 pounds (590 kilograms). The bulls in Spanish bullfighting are bred on ranches, where they are tested for bravery and ferocity. The ones that pass the tests -- performed by men on horseback, not by matadors with capes -- fight in the arena.

Bulls are never exposed to more than one fight because they have good memories, which is why the tests are not performed by men with capes. They'd be dangerous to matadors during cape work, which is the highlight of the bullfight, if deployed a second time.

The capes used in bullfighting are red, not because this is a color to which bulls react, but to hide blood and other stains and to be more visible to spectators. Some people believe that bulls become angry when they see red, but that's simply not the case. Bulls are colorblind; they respond to the movement of the capes, not to the color.

Throughout history, people have altered bulls to make them easier for bullfighters to fight. For example, they've clipped bulls' horns in order to make them safer or overfed bulls, which makes them fat and slow. Dedicated followers of bullfights can spot altered bulls, and there is a process for calling them out in the ring. Bulls deemed unfit are replaced by a substitute.

Toreros, or bullfighters, often come from areas surrounding the breeding ranches. They grow up watching bulls and learning bull behavior, in order to compete successfully against them [source: McCormick].

Bullfighting may be considered a national tradition in Spain, but it's also big business. Up next, a look at who's making money and how bulls are used in advertising.