by Karen Kirkpatrick
NEXT PAGE 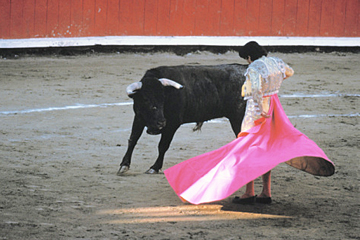 The ritual of the bullfight entrances some and horrifies others.
PhotoLink/Photodisc/Getty Images

The sequined and gold embroidered traje de luces, or suit of lights, gleams in the afternoon sun as the matador waves his scarlet cape. The enormous bull, head hanging from injury but still very powerful, charges. With one hand, the matador whisks his cape around in a move as carefully choreographed as a ballet, causing the bull to turn. With the other hand, he plunges the sword into the bull's neck between his shoulder blades and delivers the fatal blow. The crowd cheers the bull and the matador for a fine performance in this centuries-old dance of death.

Since at least the fourth century, bullfighters have faced their own mortality in an expression of what some in Spain, the home of bullfighting, call national tradition, but others call animal cruelty.

The American author Ernest Hemingway celebrated the art and choreography of bullfighting in his nonfiction account "Death in the Afternoon." First published in 1932, the book is considered one of the most influential works on the spectacle ever written. In addition to honoring the sport itself, it offers the author's opinion on what he sees as the considerable bravery of matadors. Hemingway's love of bullfighting also features in his novels, including "The Dangerous Summer," about two rival matadors.

Next up, how bullfighting began -- a brief look at the rituals, games and history that became the sport we know today.