What does 'bread and circuses' mean? 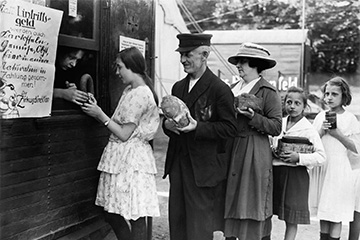 After World War I, the collapse of German currency led to material assets being used for money. Here, people are exchanging bread, jam and other goods for circus tickets. The phrase really refers to people being pacified by their government with food and entertainment.
© Keystone/Corbis

You've just cajoled the last lo mein noodle out of a takeout container and narrowly avoided choking on it, thanks to the dangerously hilarious comedy special you're watching. Then, just as soon as you've begun to recover, that friend starts texting -- railing against the inadequacies and inequities of local government. Instead of replying, though, you put your phone on vibrate and turn back to the entertainment at hand. It's just too difficult to get upset when your belly is full and your mind is distracted.

The idea that people can be pacified by food and entertainment when they should be rallying to their prescribed civic duties isn't a new one. In fact, the concept was first described in ancient times by the satirical Roman poet Juvenal, who penned the Latin term panem et circenses, which means "bread and circuses."

"Two things only the people anxiously desire -- bread and circuses," he wrote, lamenting the failure of citizens to take action as the democratic Roman Republic fell and the heavy-handed Roman Empire began.

Within a mere 100 years, Rome underwent massive governmental changes. What in 133 B.C.E. was a free republic that relied on a voting populace and an assembly system morphed into an embittered autocracy by the first century C.E. [source: Beard].

Thus, Juvenal's term, "bread and circuses" went viral, used by scores of people -- then and now -- to describe people who voluntarily trade their democratic freedoms in exchange for stable-yet-controlling government.

Back then, the Roman government kept the Roman people pacified by offering them free food and rousing entertainment in the Roman Colosseum. Now, "bread and circuses" applies to any civic or governmental entity -- or any situation, really -- in which the masses willingly accept short-term solutions to ease their discontent.

The "bread and circuses" concept is also a fitting descriptor for Dominant Ideology. Dominant Ideology is a Marxist construct exemplified by the idea that economically disadvantaged classes will accept that it's their fate to remain so [source: Purdue].

It's possible that the moral of the story is one of independence -- in thought, action and economics. And especially when it comes to the Roman Colosseum.