A Day in the Life of a Bounty Hunter 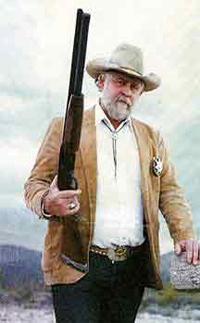 Bob Burton is one of the most respected bounty hunters in the country. He's been in the business for 25 years, during which time he has brought thousands of bail jumpers to justice. Last year alone, his agents made 20,000 arrests.

A typical bounty hunt for Burton begins with a call from a bail bondsman. He then goes to the bondsman's office and gets a power of attorney, which gives him the authority to arrest the suspect on behalf of the bail bondsman. Burton also collects personal information on the accused, such as Social Security number, date of birth and car make and model.

"Then we start looking for the Judas," Burton explains. The Judas is that one person who has been scorned by the accused and is now willing to reveal the skip's whereabouts. The Judas can be a drug dealer, an ex-girlfriend, the person who put up the bail collateral and who now feels betrayed or even the person's mother or father.

Like any effective predator, Burton must know his prey. He finds out where the skip likes to hang out, traces the skip's phone calls and pores through his or her credit card statements. Sometimes, Burton tips bouncers or motel clerks anywhere from $20 to $300 to call him when the fugitive shows up.

Burton says he has the advantage over the police because he doesn't approach his intended catch wearing a police uniform and badge. "The fugitive drops his guard because he's not looking for the bounty hunter -- the guy sitting next to him at the bar quietly calling for backup," he says.

Staking out a fugitive can be an excruciatingly long process. Burton and his team can wait for hours or even days at a location. Once he has found his man or woman, the arrest can go in one of several different ways. "When we're going to pick up a 25-year-old girl who has bounced a check, we don't go into raid mode. We say, 'Look honey, come with us. We don't want to put handcuffs on you,'" says Burton.

On the other end of the extreme are the more hardened criminals who resist arrest. Sometimes, Burton and his team try to distract the fugitive, for example by jamming his car door lock with paper so he has to fumble around for a few minutes. In other cases, they have to break down a door and take the person into custody.

Then Burton cuffs the suspect, puts him or her in the back seat and drives the skip to a jail in the county in which he or she was originally arrested. Burton has driven fugitives thousands of miles across the country.

Training to be a Bounty Hunter

An increasing number of schools are offering certification and even degree programs in bounty hunting. Most bail-enforcement groups also sponsor seminars on the subject. But the real job requirements -- resourcefulness, intelligence and the cunning to outthink and outsmart the bail jumper -- can't be learned from a textbook. The best way to learn the ropes is by getting out on the streets and doing the job. Many bounty hunters are former police officers or private investigators, but law-enforcement experience isn't required.

Both men and women can be bounty hunters. The key is to know both federal and local laws and to act like a professional, says Burton, because you have to deal with judges and other law-enforcement officials on a regular basis. "We must have both a boardroom and a booking room mindset," he says.