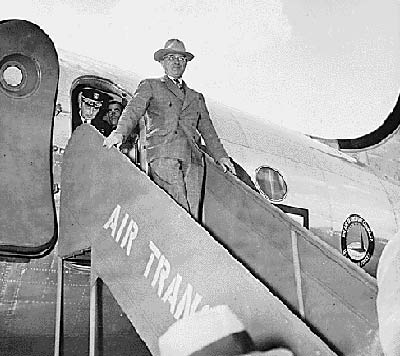 Up until World War II, the president of the United States rarely traveled far from home. Visiting other countries simply took too long, and it cut the president off from the major institutions of government.

The rise of air travel made it feasible for the president to move around the globe and return home in short order. In 1943, Franklin Roosevelt became the first acting president to take to the air when he rode a Boeing 314 "flying boat" to a wartime conference in Casablanca.

Roosevelt took the plane because German U-Boats made the seas too treacherous, but the success of the mission established air travel as the standard mode of presidential transportation. Soon, the government decided to assign a military aircraft for presidential use. The Air Force originally selected a C-87A Liberator Express, basically a B-24 bomber configured for civilian operation, which was christened the "Guess Where To."

After another C-87A crashed under mysterious circumstances, the Secret Service decided it wasn't a safe plane for the president. They soon configured a C-54 Skymaster for Roosevelt, complete with sleeping quarters, a radio telephone and a retractable elevator for Roosevelt's wheelchair. The plane, nicknamed the "Sacred Cow," carried Roosevelt on several important missions, including the historic Yalta Conference.

President Truman took over the Sacred Cow, and later replaced it with a modified DC-6, which he dubbed the "Independence." Unlike the Sacred Cow, the Independence was covered in patriotic decoration, including an eagle head painted on its nose. President Eisenhower introduced two similar propeller planes, with upgraded equipment, including an air-to-ground telephone and an air-to-ground teletype machine.

In 1958, presidential travel took a giant leap forward when the Air Force introduced two Boeing 707 jets into the fleet. The Air Force began using the radio call designation "Air Force One" during Eisenhower's administration, and the public took it up after Kennedy took office.

At the beginning of his term, Kennedy added a more advanced, long-range 707, and oversaw an aesthetic redesign -- the blue and white decoration still used today.

The VC-137C, one of the Boeing 707s that predated the current Air Force One
Photo courtesy U.S. Deparment of Defense

This plane and a twin added to the fleet in 1972 played a part in some of the most important historical events of the past 50 years. The 707 flew Kennedy to Dallas on November 22, 1963, and brought his body back later that day. On the return flight, Lyndon Johnson was sworn in as the next president. The twin plane flew President Nixon from D.C. to California following his resignation. Mid-flight, the crew received confirmation that Gerald Ford had been sworn in as the next president, and they changed their radio call name from Air Force One to SAM (special air mission) 27000.

The twin 707s served President Reagan throughout his two terms, and George Bush Sr. through the first part of his term. In 1990, the Air Force replaced the planes with the 747s in use today. The planes may be replaced again as early as 2010, when they hit their 20-year mark.

For more information about Air Force One planes past and present, check out the links in the next section.