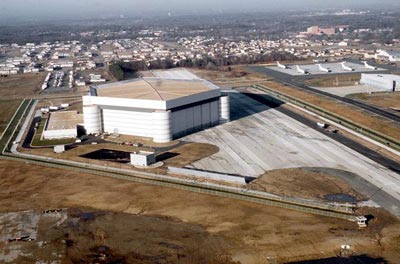 The maintenance and support complex for Air Force One, at Andrews Air Force Base in Maryland
Photo courtesy U.S. Department of Defense

Every Air Force One flight is classified as a military operation, and it is handled as such. Air Force crews at Andrews Air Force Base in Maryland carefully inspect the plane, and the runway, before every flight.

When it's time to head off, the Marine One helicopter brings the president from the White House to Andrews Air Force Base. Teams all over the base keep an eye out for any unauthorized craft in the area and are authorized to shoot on sight.

In advance of every Air Force One flight, the Air Force crew sends C141 Starlifter cargo carrier planes, toting the president's motorcade, to the destination. This collection of bulletproof limousines and vans, loaded with weaponry, keeps the president safe on the ground.

The president always arrives at the base with "the football," the briefcase that holds the codes for nuclear deployment. An Air Force officer guards the football for the entire flight, before passing it off to an Army officer on the ground.

Just like a normal jetliner, Air Force One has a crew to fly the plane and a steward crew to prepare and serve meals and to clean the aircraft. These crew members are carefully screened military personnel, with exemplary service histories. Even the crew members who prepare meals must operate with a high level of security. For example, when buying food, they must hit the stores undercover, and they must select markets at random, in order to protect the president from a poison attack. Onboard the plane, the crew provides 24-hour first class service.

These crew members enjoy a very rare privilege -- they get to work alongside the president when he is at his most relaxed. Every president since Harry Truman has formed close connections with his flight crew, and the final Air Force One flight is always an emotional trip.