What is Air Force One? 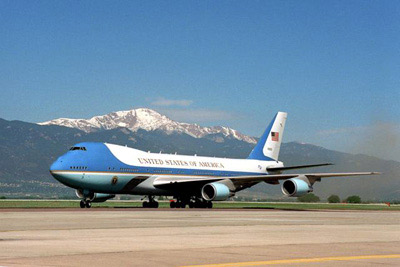 One of the two modified 747s that commonly flies as "Air Force One"
Photo courtesy U.S. Deparment of Defense

Most people have a general idea that the president's plane is a flying office with all sorts of high-tech equipment. But there are two essential facts about Air Force One that the general public isn't aware of.

The two planes have the same general structure as a normal Boeing 747-200B, and similar capabilities. They are almost as tall as a six story building, and they're as long as a city block. Each has four General Electric CF6-80C2B1 jet engines, which provide 56,700 pounds of thrust a piece. The top speed is between 630 and 700 miles per hour and the ceiling maximum (how high the plane can fly) is 45,100 feet. Each plane carries 53,611 gallons of fuel and weighs 833,000 pounds fully loaded for a long-range mission. With a full tank, the plane can fly half way around the world.

Like a normal 747, these planes have three levels. But the inside, the plane doesn't resemble commercial 747s in the slightest. In the next section, we'll look at the major components that set the VC-25A planes apart from a normal jetliner.