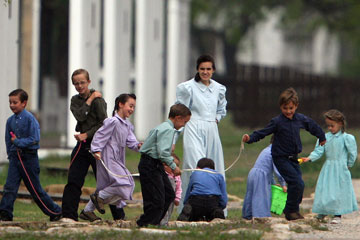 Most people associate Mormon Fundamentalism with pictures like this -- FLDS women and children removed from the Yearning for Zion compound in 2008.
Mike Terry/Deseret Morning News/Getty Images

Not all Fundamentalist Mormon groups are alike -- there are anywhere from five to more than a dozen separate Fundamentalist sects out there, depending on how you define "separate," and each has its own Prophet, location, name and customs. While they all tend to live in tight communities, dress conservatively and practice polygamy, there are profound differences between them, too.

Many people have come to associate Mormon Fundamentalism with media images and information released after raids on polygamist compounds: child brides, women and girls who look like they stepped out of 1920s rural America, and fully isolated lives.

Many of those images are of the FLDS, or Fundamentalist Church of Latter Day Saints (which is not affiliated with the mainstream LDS Church). A lot of Fundamentalist Mormons in fact live more open, "normal" lives. They have ties to the community, dress conservatively but in today's styles, and have modern hair styles. They get married when they want to and they choose their own spouses.

In the end, of course, the practice of polygamy sets all Fundamentalist Mormons apart from the monogamous majority. In areas where they've settled en masse, though, polygamists tend to find a relatively laissez faire attitude on the part of government agencies and neighbors, their religious choice tolerated unless it impinges on other rights. A marriage involving three consenting adults, for instance, may skate by under "religious freedom." One between two consenting adults and a 14-year-old child would draw the cops if the truth got out.

But most Fundamentalist Mormons don't form marriages that include children. Most are, polygamy aside, law-abiding citizens who either contribute to the community or else live quietly outside it, and most of the monogamists surrounding them adopt a live and let live attitude.

Nonetheless, the division is deep: Most people don't marry two, three or 10 spouses, and the taboo seems to be an enduring one. As long as a Western marriage is between exactly two people, a certain degree of secrecy, and therefore separation, will be part of the polygamous lifestyle in North America.