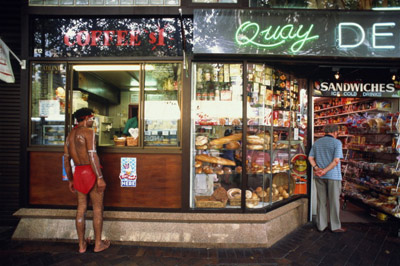 A Aborgine in a modern train station in Sydney, Australia. Many Aborigines live in modern, large cities.
Paul Souders/Getty Images

The 2016 census in Australia showed that the 649,171 people identified themselves as being "of Aboriginal or Torres Strait Islander origin," up 18.4 percent from 2011. This represented 3.3 percent of the Australian population, up from 3 percent in 2011. The rapid increase may be due to the fact that Aboriginal Australians have slightly larger families than non-Aboriginal Australians and also that more people may be identifying in this group, particularly those from mixed unions [source: Biddle and Markham].

Also, the number of people speaking an Australian indigenous language at home increased slightly, to 63,754 people from 60,550 in 2011. And the percentage attending high school increased to nearly 60 percent from 51 percent in 2011. Household income had also increased, although it was still only two-thirds of what a non-indigenous Australian would earn [source: Biddle and Markham]. So, although things are improving, there are still glaring inequalities between the races.

Many traditional Australians are trying to spread their history to the members of their community who seem to have lost it. They've hired teachers to train students in the traditional Aboriginal languages. Even a few radio and TV stations feature only Aboriginal programming to educate the generations that have had no prior experience with their culture.

And of course, there's Aboriginal art. Their art is world-famous, and many Aboriginal Australians make a living off selling their pieces. Traditionally, they view art much like their dreamings: sacred and secret. Only a select few people, after reaching a proper level of knowledge of Aboriginal history, are permitted to see the artwork. In recent years, though, that's changed, so some artists can make money to support themselves and their families.