The Aboriginal people of Australia were the first people to set foot on the continent, somewhere between 40,000 and 60,000 years ago. The Aboriginal Australians' creation story describes their arrival in terms of the Dreamtime, the beginning of time, when the spirits created the world.

During Dreamtime, spirits rose from below the earth and transformed into all the natural elements you see in Australia today – rivers, lakes, mountains, hills and caves. The spirits literally make up the land. Aboriginal Australians see these spirits in much the same way as Christians view God or Muslims view Allah. However, they believe that these spirits are alive within the land of Australia. Because of this, Aboriginal Australians view the land as sacred and treat it as such.

The dreamings, or stories, of the Dreamtime are also considered sacred, and they're kept secret from the outside world. Elders draw these stories in a series, called a dreaming trail, using symbols. Young men then learn what the symbols mean and how to translate them so they can pass the history along to the next generation. Many Aboriginal Australians consider the dreamings to be the absolute truth – an unquestionable recording of history.

The scientific explanation for how Aboriginal people arrived in Australia is simple: They walked. Within the last decade, studies have proposed the possibility that all humans came from Africa within the last 200,000 years [sources: The Independent, Lewis]. A group of geneticists at the University of Cambridge in England built on that research by studying the DNA of Aboriginal Australians to determine when they arrived in Australia and from where.

According to Dr. Toomas Kisivild and his team, the Aboriginal people walked from Africa onto Eurasia. From there, they spread from India along the coastlines of Southeast Asia, where they then traveled over a land bridge connecting Australia to Asia [source: The New York Times]. Once the seas rose and covered the land that connected the continents, indigenous Australians were isolated for thousands of years.

What was life like for them, and how did that change with an influx of English settlers? How has the struggle for civil rights in Australia compare to what's happened in other countries? Read on to learn how much has changed in the last few centuries.

Early Aboriginal Australians were hunter-gatherers who practiced no farming techniques and kept no domestic animals. They had limited weapons, mostly made of wood and stone, to help them acquire their food. As in many other communities around the world, the men were the predominant hunters, killing large and small animals such as wallabies, emus and kangaroos. Women made an equal contribution by gathering vegetables, fruits, roots and small game like snakes.

In coastal areas, both men and women dove for shellfish. They also used fibers and ropes to make baskets to catch fish. Coastal indigenous people developed a type of boat that looked like a flattened canoe. Because they were made of brush and bark, these boats would become waterlogged after a period of time. After only a few miles, they would begin to disintegrate altogether.

As we discussed in the last section, the ancient Aboriginal people worshipped their land, and they did everything they could to protect it. In order to preserve the land and its resources, most tribes slept on the ground with no shelter. They hunted only what they needed to eat and gathered only the plants and roots they needed to sustain themselves. According to Aboriginal beliefs, the spirits assigned the land itself to the various tribes. Because of this, there were no territorial wars – if people were on land that didn't belong to their tribe, they would begin to feel the spirits' angry energy, and bad things would begin to happen.

For most of their existence, indigenous Australians didn't wear much clothing. They kept themselves warm by draping themselves in animal pelts that were sewn together. In other areas, they might use what they could find, like animal fat or a clay called ocher, to protect their skin. Women often made necklaces using materials like shells. Their bodies were often canvasses, with charcoal and ocher used as paint.

Music and dance were a large part of the culture, as was storytelling. Elders used all three to tell the stories of the dreamings, give thanks to the spirits and even ask favors like increased fertility or rain. They also created musical instruments, the most famous being the didgeridoo. The creation of a didgeridoo begins when termites hollow out the inside of a piece of wood, and Aboriginal Australians cut the size down to 5 feet. When played, the didgeridoo produces a low hum caused by vibrations. Various tribes use it in formal ceremonies and events. Aboriginal Australians kept up this peaceful way of life for more then 40,000 years. But that all changed once the Europeans colonized Australia.

The colonization in the history of Australia was very similar to the colonization of the Americas. In addition to settlers who traveled to America voluntarily, governments used the colonies as prisons. Once the American Revolution began in 1776, the English government needed a new place to send its prisoners, since the American colonies would no longer take them. So in 1788, England sent a crew to Australia, then known as New South Wales, and began building prisons. This would mark the beginning of the fall of the Aboriginal population.

As with the American Indians, the English forced the Aboriginal people off their land. Many were beaten and killed. Others contracted diseases that were foreign to them. Their immune systems couldn't fight these illnesses off, and many people died. Starvation became a major problem – Aboriginal Australians could no longer roam the land where they found their food, and many tribes died out completely.

The English forced many of those who weren't killed into slavery. Women and children did everything from gathering food to cleaning. Many women were also kept as sex slaves.

When the English arrived in 1788, the Aboriginal population was in the hundreds of thousands and possibly into the millions. With the deaths that followed the arrival of the English, the numbers of Aboriginal people dwindled drastically until there was almost no one left.

Unfortunately, over the next centuries things got worse. Besides losing hundreds of thousands of lives, the Aboriginal people also lost much of their culture. They could no longer tell their stories and traditions, and in some cases, there was no one to hear them. History was lost. At the time of colonization, Aboriginal people spoke an estimated 250-300 different languages [source: Suter]. More than half of these have disappeared altogether.

Then, in the early part of the 20th century, white Australians decided the only way to save the Aboriginal people was to assimilate them to their way of life.

Australia was the last continent to be found by the Europeans. In 1768, James Cook left England to explore the South Seas. He came across Australia and proclaimed it New South Wales. He promptly left, and no one else ventured to the continent for two decades.

Aboriginal Australians in the 20th Century

Beginning in 1910, non-indigenous Australians began to take Aboriginal children from their homes and families. These children, known as the Stolen Generation, were either given to white families – to be raised as white children – or to institutions and orphanages where they were forced to assimilate to white society. Between 1910 and 1970, when the practice stopped, over 100,000 children had been separated from their families and culture [source: Parliament of Australia]

In 1967, following the example of the Civil Rights Movement in America, Aboriginal Australians began to fight for equal rights. The white Australians – the only ones with the power to vote – passed a referendum to the Australian constitution that gave indigenous Australians the right to vote. The passing of the referendum also meant that Aboriginal people could be included in future censuses, officially recognizing them as citizens of Australia.

Aboriginal people are still fighting for equality in Australia today, and racism is still prevalent throughout the continent. The life expectancy of a typical indigenous Australian lags about eight years behind that of a typical white Australian [source: Creative Spirits]. Aboriginal people still don't own most of the land that was taken from them during the colonial period.

The term "Aborigines" is now considered perjorative in Australia by many people. The preferred term is "Aboriginal people" or "Aboriginal and Torres Strait Islanders." Better yet, use the name of the specific Aboriginal tribe or nation if you know it.

Over the last two decades, Aboriginal Australians have tried to reclaim what was once theirs. Some of the major turning points were:

While all of these events helped to usher in equality for Aboriginal people, they by no means left a perfect system in place. In the next section, we'll look at how Aboriginal Australians live today.

The 2016 census in Australia showed that the 649,171 people identified themselves as being "of Aboriginal or Torres Strait Islander origin," up 18.4 percent from 2011. This represented 3.3 percent of the Australian population, up from 3 percent in 2011. The rapid increase may be due to the fact that Aboriginal Australians have slightly larger families than non-Aboriginal Australians and also that more people may be identifying in this group, particularly those from mixed unions [source: Biddle and Markham].

Also, the number of people speaking an Australian indigenous language at home increased slightly, to 63,754 people from 60,550 in 2011. And the percentage attending high school increased to nearly 60 percent from 51 percent in 2011. Household income had also increased, although it was still only two-thirds of what a non-indigenous Australian would earn [source: Biddle and Markham]. So, although things are improving, there are still glaring inequalities between the races.

Many traditional Australians are trying to spread their history to the members of their community who seem to have lost it. They've hired teachers to train students in the traditional Aboriginal languages. Even a few radio and TV stations feature only Aboriginal programming to educate the generations that have had no prior experience with their culture.

And of course, there's Aboriginal art. Their art is world-famous, and many Aboriginal Australians make a living off selling their pieces. Traditionally, they view art much like their dreamings: sacred and secret. Only a select few people, after reaching a proper level of knowledge of Aboriginal history, are permitted to see the artwork. In recent years, though, that's changed, so some artists can make money to support themselves and their families. 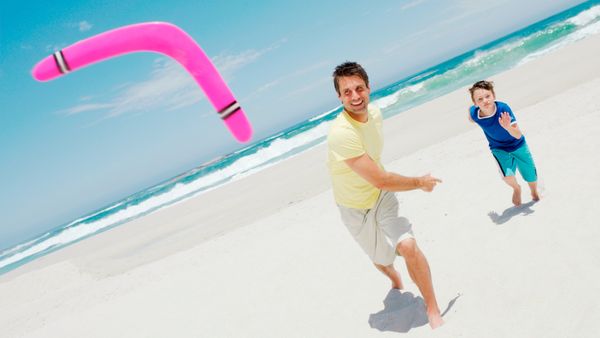 Up Next
How Boomerangs Work
Explore More 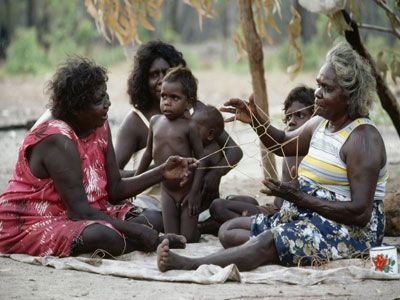 You May Like
What was Australia's Stolen Generation?
Explore More 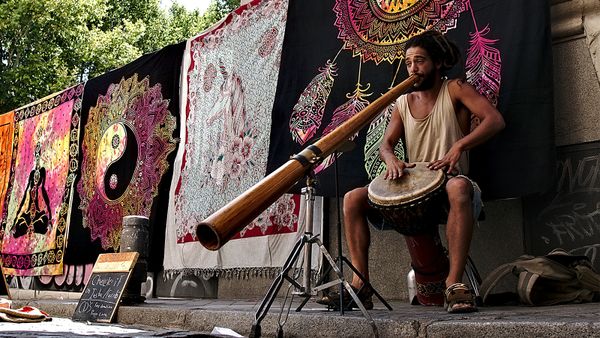 Keep Reading
Getting to Know the Didge, the 'World's Healthiest Instrument'
Explore More