by the Editors of Publications International, Ltd. & John Kelly
Prev NEXT
8 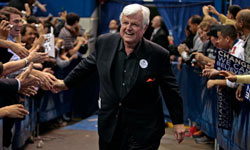 After being elected to the U.S. Senate in 1962, Edward M. "Ted" Kennedy was known as a liberal who championed causes ranging from education to health care, but he was less successful in his personal life.

On July 18, 1969, Kennedy attended a party on Chappaquiddick Island in Massachusetts. He left the party with 29-year-old Mary Jo Kopechne, who had campaigned for Ted's late brother Robert. Soon afterward, Kennedy's car veered off a bridge and Kopechne drowned.

An experienced swimmer, Kennedy said he tried to rescue her but the tide was too strong. He swam to shore, went back to the party, and returned with two other men. Their rescue efforts also failed, but Kennedy waited until the next day to report the accident, calling his lawyer and Kopechne's parents first, claiming the crash had dazed him.

There was speculation that he tried to cover up that he was driving under the influence, but nothing was ever proven. Kennedy pleaded guilty to leaving the scene of an accident, received a two-month suspended jail sentence and lost his driver's license for a year.

The scandal may have contributed to his failed presidential bid in 1980, but it didn't hurt his reputation in the Senate. In April 2006, Time magazine named him one of "America's 10 Best Senators," and he was esteemed at the time of his death in 2009.

Next, we'll turn to the best-known of all political scandals: Watergate.