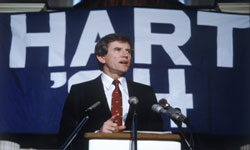 "I know I'm going to be president." Those were Gary Hart's confident words in the early days of the 1984 Democratic primaries [source: Hanlon]. While the ruggedly handsome Colorado governor — known as "Camelot in cowboy boots" — made a strong and surprising early showing, he would eventually lose the nomination to Walter Mondale, partly due to two blips in his backstory: That he was born Gary Hartpence; and that he was a year older than advertised. Also, Mondale crushed Hart in a primary debate with the pop-culture zinger: "When I hear your new ideas, I'm reminded of that ad, 'Where's the beef?'"

But 1988 was a new year and a new race for the White House, one in which Hart was widely considered the Democratic frontrunner. That was before another shadow from his personal life threatened to eclipse his platform of "new ideas." Like his political idol, John F. Kennedy, the married-and-loving-it Hart had a tragic weakness for beautiful women. Rumors of Hart's infidelities traced back to his years as the young and brash campaign manager for George McGovern, during which he became close friends with the infamous Hollywood playboy Warren Beatty [source: Dionne].

When womanizing charges surfaced in the 1988 race, Hart not only denied the claims, but openly dared the press to follow him around [source: Blake]. Bad move, Mr. Hartpence. The Miami Herald put a team of reporters on Hart's tail, culminating in a damaging series of articles detailing the 52-year-old candidate's dalliance with a 29-year-old model and actress named Donna Rice [source: Dionne]. Both Hart and Rice vehemently denied that the relationship was sexual, but a single photo effectively killed the campaign: the blonde and beautiful Rice sitting on Hart's knee as they prepared to board a private Caribbean yacht called "Monkey Business." Yes, the boat was called "Monkey Business." Hart's second presidential run was over a month after it began.