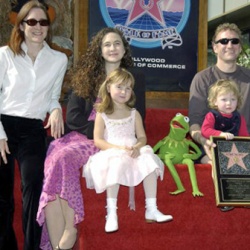 Henson siblings Lisa, Heather and Brian pose with their children and beloved Kermit the Frog as Jim posthumously receives a star on Hollywood's Walk of Fame.
Vince Bucci/Getty Images

In honor of what would have been Jim Henson's 75th birthday in 2011, his oldest son Brian offered this glimpse into growing up with the then-deceased Muppeteer: "He was one of those rare parents who was always ready to play again" [source: Henson]. No matter the game, Jim Henson, who invented Kermit and his gaggle of curious and clever Muppet friends, was always up for a rematch with his kids -- or any other creativity-stoking pastime. Fueled by this passion, Henson, who created "Sesame Street," the longest-running children's educational program in television history, sought to make learning fun at home and on screen.

Henson and his wife Jane, who assisted him on his first regular televised puppet segment "Sam and Friends," had five children whom have remained actively involved in the family business. After their dad died in 1990, the Henson kids took the helm of Jim Henson Company, eventually selling the Muppets to Disney in 2004 [source: Barnes].