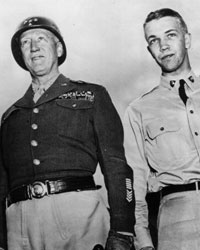 In early June 1944, while training troops for impending battles in Normandy, U.S. Gen. George S. Patton penned a letter to his only son, George S. Patton III, who was then studying at West Point. In that brief father-son "sermon" on courage on the battlefield, Patton told the 20-year-old, "Cowards are those who let their timidity get the better of their manhood. You will never do that because of your bloodlines on both sides" [source: McKay and McKay]. A year later, Gen. Patton was killed in a car accident in Germany, but his son's military career continued, and he eventually earned the rank of Major General after fighting tours in the Vietnam and Korean wars [source: Stout]. And indeed, combat ran in the family as the 1944 letter attested; the elder George S. Patton Sr., George S. Patton III's grandfather, was a Confederate colonel in the Civil War [source: Patton].