by the Editors of Publications International, Ltd. & Matt Cunningham
Prev NEXT
6 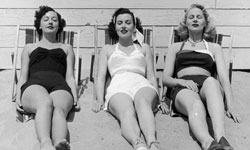 In any era, certain items of clothing become synonymous with sex appeal. In the 1950s, the conical bra literally shaped the standard of what made a woman alluring.

Also called a torpedo or bullet bra, the conical bra got its name from its cone-shaped construction that lifted and separated the pin-up proportions of Hollywood glamour girls like Marilyn Monroe, Jayne Mansfield and Jane Russell.

In fact, Russell gets all the credit for making the bra a sensation. Legend has it that playboy millionaire Howard Hughes engineered the pointy bra to enhance Russell's natural assets in "The Outlaw." The film did poorly until Hollywood censors banned it for lewdness, thanks to a bevy of shots featuring Russell and the undergarment's uplifting effect [source: The Voice of Reason].

The bra's cups were constructed of satin or nylon stitched in a circular pattern. Known as the push-up bra of its time, it was all the rage with the sweater girl set. The design fell out of favor in the early 1960s when manufacturers started styling undergarments with more padding and underwire support. But this piece of overly constructed underwear has re-emerged from time to time, perhaps most notably as part of pop superstar Madonna's Vogue-era concert attire in the 1990s.