by the Editors of Publications International, Ltd. & Matt Cunningham
Prev NEXT
7 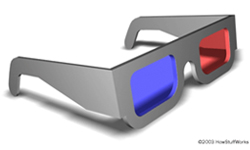 Two images were displayed on 3-D movie screen, one red and one blue. Glasses like these only allowed one color image to reach each eye, and the brain would separate the layers.

The 3-D boom of the 1950s may have saved the film industry. With television programs stealing audiences away from theaters at an alarming rate, studios of that era developed a unique movie experience that successfully coaxed viewers away from their living room sets.

The so-called golden era of 3-D films began with the release "Bwana Devil" in 1952, the first big box office success to use the technology. Other notable films of the era include Vincent Price's horror classic "House of Wax" (1953), "It Came From Outer Space"(1953) and "The Creature from the Black Lagoon" (1954).

In 1953, there were more than 5,000 theaters in the United States equipped to show 3-D movies. The fad went flat later in the decade when patrons complained of eye strain caused by poorly aligned projectors. Today's digital 3-D movies use new technology to overcome the problem, and the recent flood of 3-D films in theaters suggests that this fad is in the midst of a high-tech comeback [source: Stereoscopy].