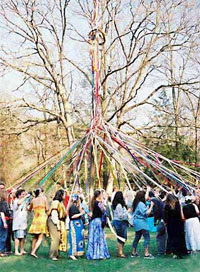 Part of the Wiccan philosophy is the eternal cycle of life. The Wheel of the Year is essentially the Wiccan calendar, and it shows the never-ending cycle.

The Wiccan year begins on the sabbat (holy day) of Yule, when the Goddess gives birth to the God. The God grows strong through spring and summer, and then in fall, the God and Goddess unite. At this time, the Goddess becomes pregnant with the new God. The old God dies on Samhain (Halloween) to be reborn at Yule. This cycle is acted out symbolically during certain rituals and is known as the Great Rite (see previous section).

There are eight sabbat rituals throughout the year:

So now you've had a small peek into the world of modern Wiccan witches. For more information on witchcraft, paganism and related topics, check out the links below.