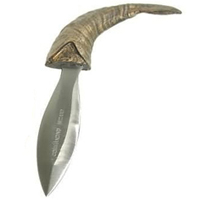 Witches can either practice their craft in groups, called covens, or by themselves as solitaries. New members are welcomed into covens with a formal initiation ceremony. In the Gardnerian tradition, there are three phases of learning, each of which lasts a year and a day. Covens generally have their own rules, procedures and names for these phases, but they tend to fall into the following categories:

Once a new member has completed all phases, he or she is a full-fledged witch with the power to perform and participate in formal rituals.

In the next section, we will explain the basics of the Wiccan rituals. But before we get into that, let's take a look at some of the different tools of the witch's trade.

A knife isn't one of the traditional witch's props you can get at the costume shop, but the athame is an important part of many rituals. The athame is a double-edged knife with a blade about 6 inches long. It is not terribly sharp -- it is used to mark the edges of the circle and to stir the salt and water that are used to consecrate (or make sacred) the circle. It is also used sometimes to carve symbols or words into candles. The athame's owner marks either the handle or the blade with his or her witchcraft name and stores it in a white container or cloth. The athame is also used in the Great Rite ritual (more on the Great Rite later) as a phallic symbol, representing one half of the union of the God and Goddess from which new life comes.

Some witches use a bell during rituals, but there is no official or required use of one. Some examples of when a bell might be rung is when the circle is opened or closed, to invoke the God or Goddess or simply to signify when certain phases of the ritual are ending or beginning.

Witches don't actually fly on brooms, although many do have them. They're used to purify an area of lingering energies (similar to the use of sage below) before "casting a circle." Circles are cast before any ritual.

The boline is another knife used in Wiccan rites. In contrast to the athame, the boline is very sharp and is usually made of copper. Its sole use is to cut herbs.

The Book of Shadows is essentially the witch's guidebook. It contains all of a particular witch's (or coven's) ritual and spell information. It is the written record of everything the witches in that coven need to know, such as descriptions and explanations of all of the sabbats (more on sabbats later).

When a circle is cast for a ritual, there are four quadrants representing north, south, east and west. Quarter candles of specific colors are used: north is green (earth), south is red (fire), east is yellow (air) and west is blue (water). The candles are placed at the perimeter of the circle. There are also three candles used on the altar -- the color of these candles represents the ritual being performed.

The cauldron is a necessary part of witches' paraphernalia. While many years ago, cauldrons were a part of every home, now they're seldom seen except at Halloween or as a yard decoration. But cauldrons with magical powers go back to the myth of the Celtic Goddess Cerridwen, whose cauldron represented the cycle of birth, renewal, rebirth and transformation. Witches today often burn small fires (balefires) or incense in their cauldrons. The cauldron can also represent the womb during the Great Rite ritual, which calls up the union of the God and Goddess from which new life comes.

A chalice (cup) is used in ceremonies to represent the female principle of water. The chalice can also be used in place of the cauldron in performing the Great Rite, as well as in a "Cake and Ale" rite where a cup of wine is blessed by the High Priest and passed from member to member in the circle.

Clothing is optional for most rituals, although most covens require that everyone is in agreement to going skyclad (naked) before anyone does. Otherwise, witches wear long, hooded robes of varying, usually dark colors.

An altar paton is a plate (or disk) of either metal or wood with a pentagram design on it. It is used on the altar to hold the tools needed for the ceremony and to act as a focal point.

The pentacle is a five-pointed star (a pentagram) enclosed within a circle. The "upright" pentacle or pentagram (one point up, two points down) is a widely recognized symbol of witchcraft. The points represent earth, fire, water, air and spirit. The circle represents the God and Goddess that allow the energy of the pentagram to be focused. It is symbolic of the idea of bringing together spirit and earth.

Before a ritual, the area must be purified. Sage is often used (as is a besom, above) to cleanse the area of unwanted energies. When burned, the sage creates a thick, grayish smoke.

Another purifying agent is salt. The salt is usually in either a seashell or a glass dish. Salt is mixed with water to represent the elements of earth and water in order to consecrate the circle.

Witches can use a staff like they would a wand. The staff is usually shoulder height.

Some witches choose to use a sword rather than an athame to mark the boundaries of the circle.

Incense represents the element of air. When burned, it also represents fire, both of which are used to purify the area or the tools being used. The thurible is often a small cauldron of metal or any other fire-resistant material.

Many witches use wands. Wands represent fire and the life force of the witch. It is a symbol of power, wisdom and healing. The wand, like the sword, staff and athame, can be used to cast the circle. It may also be used to direct energy during a spell.

The water container used in the consecration of the circle can be any type of container as long as it is large enough to hold three pinches of salt and be stirred with the athame. Water is another purification agent.