Why is 'Macbeth' believed to be cursed? 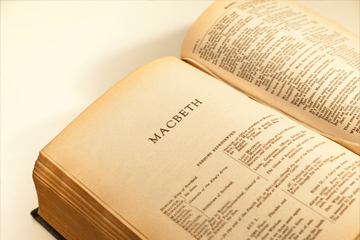 The reputation of "Macbeth" is so infamous that people involved in its production have been known to refuse to say its name aloud in a theater.
DNHanlon/ThinkStock

"Macbeth" is one of William Shakespeare's most enduring plays, written by The Bard at the dawn of the 1600s. It's believed to be performed more often than any of Shakespeare's other works, something that should be cause for applause. "Macbeth," however, has a dark side. And we don't mean the plot.

In the play, Macbeth returns from the battlefield only to encounter three witches who make a trio of prophecies, one of which indicates Macbeth will be the next king. Macbeth's wife, in an effort to speed the inevitable, encourages him to murder the reigning king. Macbeth does, but then loses sleep and becomes paranoid. He also murders his best friend, whose children were prophesied to take the throne in the future. For good measure, Macbeth murders an entire family that poses competition, too. Meanwhile, his wife becomes racked with guilt and dies. Before long, Macbeth is unseated from the throne by force and dies, too.

From the play's first performance in 1606, it seemed to be cursed. On opening night, the actor meant to play Lady Macbeth died. From there, the casualties piled up. In 1672, an actor portraying Macbeth used a real dagger to commit murder onstage. An interruption by an audience member in a 1721 performance resulted in a disgruntled band burning down a theater. In 1775, the actor playing Lady Macbeth narrowly escaped being assaulted by the audience. A protest before the play in 1849 led to a riot that killed 23 people.

The misfortune continued throughout the 20th century, with reported injuries to cast members and mysterious deaths. In 1942, for example, three cast members died, including one by suicide. In 1947, an actor was stabbed during the swordfight at the play's conclusion.

The reputation of the play "Macbeth" became so dangerous that people involved in its production won't say its name aloud in a theater. Instead, it's called "the Scottish play." If the name is uttered, immediate steps must be taken to ward off the curse, usually by leaving the room (or theater), turning around thrice to the right, spitting on the ground, then knocking and asking for permission to re-enter [source: Faires].

While the jury's still out on whether the play itself is actually cursed, "Macbeth" makes a case for art imitating life. Researchers have identified a link between the inability to sleep and paranoia, a concept explored in the play. The study, led by Dr. Daniel Freeman at the Institute of Psychiatry at King's College in London, reported what many poor sleepers already know: Sleepless nights cause people to become anxious and fearful [source: Wellcome Trust]. It's a scenario that plays out in "Macbeth," as he is dogged by insomnia and paranoid thoughts, including a voice that cries, "Sleep no more: Macbeth doth murder sleep."