Why is it good luck to shake a chimney sweep's hand? 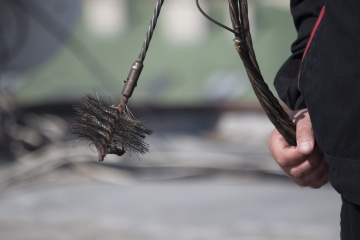 Many people believe that a handshake from a chimney sweep brings good luck, but is it really worth getting sooty for?
OgnjenVelimir/Thinkstock

Hear the word "chimney sweep," and most of us remember the movie "Mary Poppins," with Dick Van Dyke's character singing and dancing with his brush. Pretty fun, right? Many people believe that a handshake from a chimney sweep brings good luck, even though the history of the chimney sweep is actually quite dark (or sooty, if you'll excuse the bad joke).

In 17th-century England, master chimney sweeps employed small boys (and sometimes girls) to clean chimneys because they could easily fit into the flues. Typically orphans are sold into the trade by their families. Many of these children slept in cellars on bags of soot and often died of cancer, respiratory illness or as a result of falls. Parliament passed a series of resolutions in the 1800s restricting the use of child labor, but they weren't regularly enforced until the end of the century.

As an aside, some believe the expression "light a fire under you" may have originated from child chimney sweeps. If a child was afraid to climb up the chimney, some of the sterner master sweeps would make him go into the flue anyway, then light a fire in the fireplace. This would force the child to scramble up the chimney, cleaning as he went.

So how did the chimney sweep become a good luck charm? Folklore experts report several theories. These may or may not be true, but they're the common legends passed down through time.

Prince Philip reportedly dashed out of Kensington Palace on the day of his wedding to Princess (now Queen) Elizabeth to shake a chimney sweep's hand. Today, you can rent a real chimney sweep to attend your wedding, kiss the bride and shake hands. Some will even read the decree from King George declaring chimney sweeps as bringers of good fortune for the marriage.