Why do people close their eyes to pray? 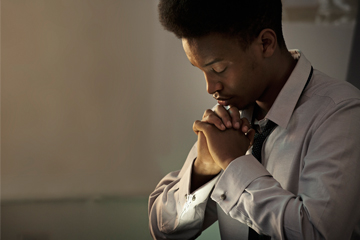 People may pray while they're standing, sitting, kneeling, you name it. Whatever the posture though, their eyes often are closed.
Colin Hawkins/Getty Images

In 1952, the U.S. Congress and President Harry Truman established a National Day of Prayer and encouraged all Americans, regardless of religion, to celebrate their faith through prayer. Prayer is a part of everyday life for many people all over the world. According to Pew Research surveys, more than half of Americans report they pray daily. An additional 23 percent pray weekly or monthly, and 76 percent of Americans believe prayer is an important part of each day [source: Lipka].

Prayer is an integral part of many religions and cultures. It can be a plea for aid, an expression of gratitude, a way to worship and a means to find fellowship with others. Along with the many different iterations of prayer, there are many rituals that surround the act of prayer. One of the most prevalent is closing one's eyes.

Why do so many people close their eyes to pray? In the Bible, there are descriptions of prayers made standing, sitting, kneeling or with arms raised, yet there aren't any verses that insist the eyelids shut during prayer. There are, however, a number of verses that describe people praying in private, which may offer a clue. For many, prayer is a private matter, an intercession between a person and God or another higher power. Closing your eyes as you do it is a way to block out distractions and focus on the conversation. Instead of using your eyes to communicate with others, you shut them and turn your thoughts inward.

By closing your eyes during prayer, you may be continuing a ritual whose roots are steeped in history. Long ago, looking directly at a king or any ruler was considered insolent. The proper response when appearing before a ruler was to close your eyes or, if you were feeling really daring, look downward. Failing to do so could launch an unfortunate chain of events that might end with a sleepover in the dungeon or a date with the guillotine.

Adopting a deferential pose -- in other words, closing your eyes -- during prayer became an appropriate way to show humility, something that was especially important when asking for mercy. Today, it's a common posture for prayers of all kinds.

Lily Dale: Where the Living and Dead Reconnect
What Does It Really Mean to Have an 'Existential Crisis'?
Goat Yoga Is Taking Zen to a Whole New Level