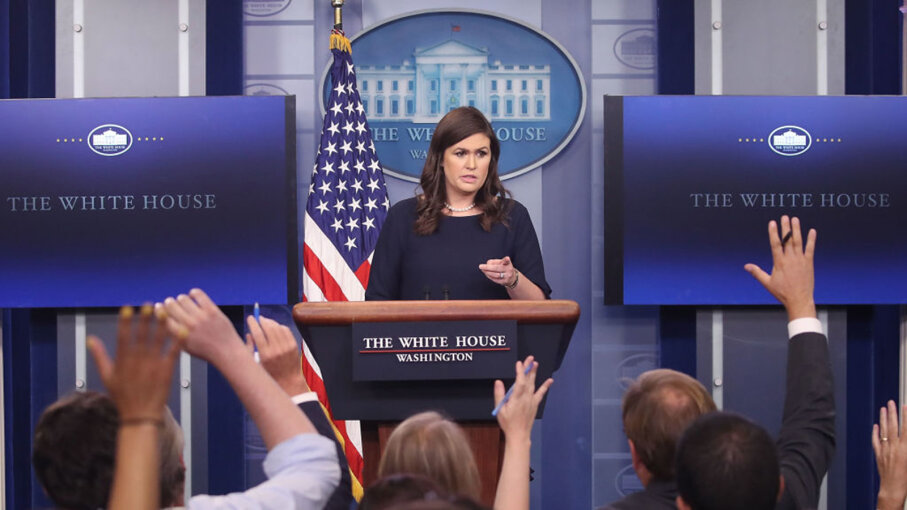 In January 2020, bestselling novelists Stephen King and Don Winslow took to Twitter to make a surprising pledge. They offered to donate $200,000 to charity if Stephanie Grisham, the press secretary for President Donald Trump, agreed to take questions from the full White House press corps for one hour in the White House’s press briefing room.

The offer reportedly was rejected by Grisham who, since taking the job in June 2019 has yet to hold even one formal White House press briefing. Her view, expressed in an interview with the Sinclair Broadcast Group, is that the briefings are unnecessary because reporters get opportunities to put questions to Trump himself, sometimes over the roar of the presidential helicopter on the White House lawn.

The History of the Press Briefing

For the time being at least, the Trump administration has abandoned what had been an important part of White House press corps’ routine dating back to the late 1800s, before the official position of White House press secretary even existed. That’s when President William McKinley set up a work space in the White House for reporters and sent his first personal secretary, John Addison Porter, to give the correspondents what the White House Historical Association notes were "more or less regular briefings."

The White House press briefing gradually evolved into a formal event. From the time of President Herbert Hoover in the late 1920s and early 1930s to Lyndon Johnson’s tenure in the mid-to-late 1960s, White House press secretaries held twice-a day briefing sessions in their own offices, according to Martha Joynt Kumar’s book "Managing the President’s Message: The White House Communications Operation." Richard Nixon, though no fan of the press, still thought the briefings were important enough that he had a swimming pool torn out so that he could convert the space into a meeting room for briefings. That area is now known as the James S. Brady Press Briefing Room, in honor of President Ronald Reagan’s press secretary, who was seriously wounded during the attempt on Reagan’s life in 1981.

During Bill Clinton’s time in the White House in the 1990s, press secretary Mike McCurry decided to allow the daily press briefings to be televised. That practice continued until the Trump White House began barring cameras from the briefings in 2017, before discontinuing them altogether.

"I think the briefings were useful for a number of reasons," former CNN White House correspondent Dan Lothian, who spent five years covering the Bush and Obama administrations, explains in an email. "First of all it was an opportunity to get the WH response or thinking on an issue on-camera rather than a written statement. It allowed us to gang up on them around a question they might have been trying to avoid. Showing them dodge an answer is sometimes the news. Briefings also put statements on the record for later comparison. Finally, every now and then there would be breaking news and as happened after Osama bin Laden was caught, lots of great details, (even if some turned out not to be true)."

Lothian, who went on to found Little Park Media and to become a visiting scholar at the School of Journalism at Northeastern University, recalls that the format for the briefings was fairly constant. "There was a certain order to who got called on. Briefings always started with The Associated Press and ended with a ‘thank you’ from The Associated Press. Once in a while the press secretary would mix it up a bit, but it usually happened around the same time each day and questions from the first two rows came in order."

"While it’s true that the president and his representatives often make themselves available in informal settings such as the White House lawn, it’s not the same as press briefings," explains Tom Jones, a senior media writer for the Poynter Institute, a journalism education organization, in an email interview.

"The format of shouting out questions under the sound of whirling helicopter is not conducive to asking complicated policy questions, nor pertinent follow-up questions," he says. "The frenzied free-for-all of these much-too-brief informal interviews make it much harder to get into the topics that require nuance and specifics. It’s so much easier for the president to brush aside or ignore questions he doesn’t like when he’s walking along the White House grounds. When he or one of his representatives are standing behind a podium in a controlled setting, they must face the questions that require long, substantive answers as opposed to the one or two short sentences that suffice in those informal settings."

That view essentially is shared by a group of 13 former White House press secretaries, foreign service and military officials who published an opinion piece on the CNN website in January 2020, calling for Trump to restore the regular briefings. In their view, having to prepare for briefings helps the government to run better. "The sharing of information, known as official guidance, among government officials and agencies helps ensure that an administration speaks with one voice, telling one story, however compelling it might be," they wrote.

Lothian also sees the apparent end of the briefings as unfortunate. "It is a valid criticism that some reporters use briefings to showboat," he says. "However, I think when covering the White House, briefings are an important function that allow the public and reporters to maintain daily connections. Sometimes it's routine information, other times an odd question from the back of the room can turn into the story of the day."

Even so, Lothian says, journalists who cover the administration will find a way to get stories. "This new normal might be unfortunate, but not paralyzing," he explains. "Reporters are in the business of getting information, whether it comes from the mouth of a spokesperson or from sources all across the beltway."

Now That's Interesting
According to Kumar’s book, one White House correspondent during the Clinton administration estimated that he got 40 percent of his information from the two daily press briefings.