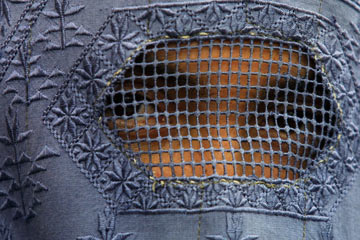 A woman looks through the mesh of her burqa.
Natalie Behring-Chisholm/Stringer/Getty Images

Debates over whether to ban the burqa often assume that women are forced by men to wear it. In many Muslim countries, women lack equality and basic rights that other women take for granted; therefore, the burqa may seem to be is just one more example of patriarchal control.

There is some evidence that women in particularly conservative countries are forced to wear a burqa or niqab out of fear of beatings, arrests or honor killings. But what of those women in France who Sarkozy addressed in his 2009 speech? Many of these women, both in strictly Islamic countries and in Western countries, have insisted to countless reporters that wearing a full covering is their choice and their right [sources: Vincent; Clark-Flory]. As believing Muslims, they interpret their holy text to mean that their faces must be covered.

Many women also say that the hijab isn't a tool of subjugation at all, but rather a means for equality. Their reasoning for this is that in public, they aren't judged on their appearance. They are free from unwelcome male advances and liberated from objectifying leers. Naomi Wolf, writer of "The Beauty Myth," commented in an editorial for the Sydney Morning Herald that these women were far from sexually repressed; they just kept their sexual appeal under wraps in a way that made it more special within the bonds of marriage.

Another reason women say they continue to wear the veil is for purposes of group identity [source: Perlez]. It's a badge of honor and solidarity in a world full of negative opinions about Islam. Some women have suggested that if countries like France were to ban the veil, it would only cause more women to wear it in defiance [source: Sullivan, Adam]. So should it be banned?