Should Burqas Be Banned? 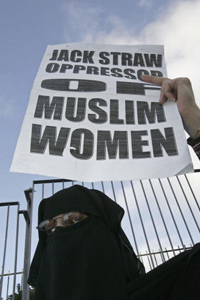 In a piece for Slate, writer Anne Applebaum argues that the burqa should be banned for reasons of politeness and respect to local customs. Just as tourists cover their arms and legs when entering places of faith on vacation, she writes, so, too, should women living in places like France remove their veils. It is, some say, extremely difficult to converse with someone wearing a facial veil, so it could be argued that removing a niqab, while maintaining a head covering, is a sign of simple courtesy [sources: Clark-Flory; Applebaum].

Some who would ban burqas focus solely on the garment as a sign of a human rights violation. These people would argue that the veil should be removed both in France and around the world in order for women to have any chance of achieving equality; you cannot, they would argue, ever be seen as a full person if your face is covered, and to continue to wear it is to be somehow complicit in your own subordination [source: Fitzpatrick].

However, to women who choose to wear a veil, the call from the West to remove it seems hypocritical. If a burqa is, indeed, a sign of submission to a male-dominated society, then what, these women ask, would you call the Western woman's enslavement to certain fashion trends such as makeup, high heels and miniskirts? Those are also fashion choices that are often designed to meet with men's approval. Who has the right to decide what is oppressive to women and what is not? Yes, there are countries where women wear burqas in which the women are horribly repressed; under the Taliban, for instance, women weren't allowed to attend school or leave their homes without a male companion. Muslim women claim these are the causes worth fighting for, and matters of wardrobe are silly [source: Abu-Lughod].

And if certain, Western religious coverings are considered acceptable, you might wonder why the hijab is not. After all, no country is trying to ban nuns from wearing whimples or Jews from donning the yarmulke. In the past, both Christians and Jews have been responsible for terrorist acts, so fear of only Islam seems irrational. If nuns choose to take a veil, how is that any different from a Muslim woman's choice to wear one? Then again, some scholars may argue, a burqa or niqab is not strictly required by Islam, and so far no one is trying to ban hijab, or headscarves.

Such a question touches on whether freedom of religion and expression is truly extended to everyone in Western countries. Does it make any sense to say women have freedom of expression, yet aren't allowed to decide what they can or cannot wear? Or is a burqa truly a threat to others' ways of life? In a world where people have to take off their shoes before boarding an airplane, is it fair to ignore security concerns about a full-body sheet?

These questions will be debated for a long time, and the answers will likely be imperfect when it comes to this controversial piece of cloth.