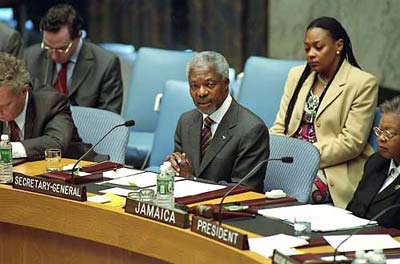 The Secretariat, headed by the Secretary-General, is a bureaucracy that keeps the U.N. running on a day-to-day basis.

The Secretary-General has a great deal of power in the U.N.. He can, for example, personally mediate disputes. He can bring matters before the Security Council. He is elected to a five-year term by the General Assembly, but his election can be vetoed by any of the permanent members of the Security Council.

The Economic and Social Council has 54 elected members chosen by the General Assembly. It makes recommendations in, as the name indicates, economic and social matters.

The International Court of Justice (a.k.a. the World Court) has 15 judges elected by the General Assembly (with Security Council approval). In this court, nations bring cases against other nations.

The sixth organ specified by the U.N. Charter is the Trusteeship Council, but it ceased operations in 1994.

Its job was to oversee territories such as those taken from conquered nations in WWII. The last territory either became a nation or merged with a nation in 1994.