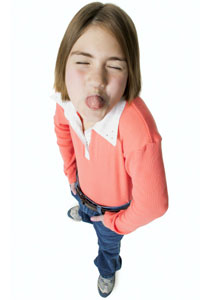 Get ready for round two of temper tantrums when puberty strikes.
Photodisc/Getty Images

Just as the toddler years are punctuated by the "terrible twos," adolescence comes with unwieldy baggage in the form of teenage angst. Sure, surging hormones and high school crushes factor in to the mood swings that accompany puberty. But just like toddlers' temper tantrums, unforeseen fits in the teen years likely trace back to growth spurts happening in the brain, right back in the same spot that brewed those toddler tempests years prior: the prefrontal cortex.

As mentioned earlier in this article, the prefrontal cortex (PFC) is the last brain region to fully mature, undergoing significant development from ages 4 to 18. Initial PFC development during childhood tends to calm temper tantrum behavior, as the fresh neural connections help kids manage their social behavior and actions. Then, at about age 11 or 12 -- thanks to prompting from puberty hormones -- a second round of remodeling takes place in the PFC, temporarily scrambling adolescents' and teens' social and emotional management skills [source: Megan]. Toss that in with their desire for autonomy and independence, a la toddlers, and the combination is a recipe for teenage temper tantrums.

Neurologists at the University of San Diego scanned the brains of people between 10 and 22 years old and noticed a certain functionality blip between ages 11 and 18. During that window, the speed with which participants identified emotions indicated by facial expressions dropped by up to 20 percent, slowly rebounding to normal levels at about 18 years of age [source: Graham-Rowe]. The researchers suspect the inhibited emotional monitoring is a byproduct of rewiring activity in the PFC that mediates social behavior. The teenage brain compensates for the PFC-under-construction by relying more on the anger-stoking amygdala to process external emotional cues, leaving teens feeling frustrated that parents just don't understand [source: Megan]. Adding fuel to that fire, the PFC also is the neurological seat of impulse control, which explains why teenagers are more apt to pursue riskier behaviors and test boundaries as well [source: Megan].

Parents dealing with tempestuous teens might benefit from hearkening back to their toddler-rearing days and remembering that the moodiness and angst are temporary, biologically driven processes. If, however, teenagers' tantrums and talking back begin to negatively impact their families or social or academic lives, it could be a sign of oppositional defiant disorder, which affects between 1 and 16 percent of adolescents [source: American Academy of Child & Adolescent Psychiatry]. The persistent disorder shares some temper tantrum signs, including arguing, anger and resentfulness, which can be resolved with parental intervention, talk therapy and medications, if necessary [source: A.D.A.M. Medical Encyclopedia]. But more often than not, whether dealing with a toddler or a teenager, temper tantrums are simply indicators that kids are growing up -- kicking and screaming, from time to time, along the way.

In April 2012, 6-year-old Salecia Johnson was arrested and taken to a Milledgeville, Ga., police station in response to an epic temper tantrum she pitched at kindergarten [source: Mandell]. The school called the local authorities after the girl intentionally knocked over a bookcase -- injuring the principal in the process -- and allegedly attempted to destroy other property. Due to Johnson's young age, no formal charges were pressed, but she was suspended for the remainder of the school year [source: Mandell].