Making Reparations for the Stolen Generation 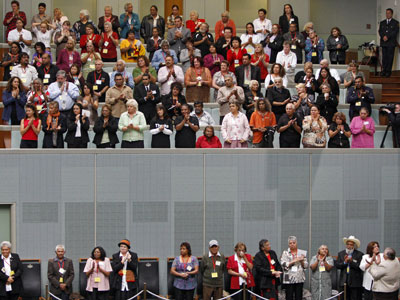 Members of the public and of Australia's Stolen Generation applaud after Prime Minister Kevin Rudd delivered a formal apology to the Aboriginal people.
Mark Baker/AFP/Getty Images

The organizations and foster families who took in Aboriginal children believed that they were being benevolent. Defenders of Australia's actions claim that some children were saved from terrible and impoverished home lives [source: Times Online]. Others, however, point to the grieving birth families and numerous abuses inflicted upon the adopted children (sexual and mental abuse, identity crises and other persisting psychological problems) as clear evidence that the government failed these children miserably [source: Culture Wars].

It wasn't until 1995 that a national investigation was launched, culminating in the release of the "Bringing Them Home" report by the Human Rights and Equal Opportunity Commission in 1997. The report detailed more than 50 recommendations as to how the Australian government could help remedy the pain caused by the removal of Aboriginal children from their homes. The report delineated that the four most critical steps were restitution, rehabilitation of the wronged parties, compensation and a guarantee against future violations [source: Amnesty International].

Australian Prime Minister John Howard refused to make a formal apology, citing his fear that it would open the Australian government to lawsuits and demands for financial compensation. The issue went largely ignored until the election of Prime Minister Kevin Rudd, who made a formal apology to the Aboriginal people on Feb. 13, 2008. The nationally broadcast apology, while long overdue, has helped to begin the healing process [source: Amnesty International].

Financial compensation to wronged individuals has yet to be delivered. Although Tasmania has established a reparations fund, no other state has -- what's more, Rudd has rejected outright the establishment of a national fund [source: The Independent]. The Australian government has refused reparations on the grounds that the children were removed from their families with their best interests in mind [source: ENIAR].

To date, only one member of the Stolen Generation has been compensated for the trauma inflicted on him. Bruce Trevorrow, who was taken to the hospital on Christmas Day in 1957 for stomach pains when he was just 13 months old, was falsely listed by the hospital as having no parents and suffering from neglect and malnourishment. Bruce was sent to live with a white foster family and never seen again by his father, who died eight years later. He wasn't reunited with his mother until he was 10 years old, after suffering through a childhood filled with self-doubt and discrimination at school. In 1998, Trevorrow filed a lawsuit against the South Australian government, alleging that his alcoholism, depression and loss of cultural identity were caused by his deceitful upbringing.

While many other Aborigines can make the same case, what helped Trevorrow succeed in his lawsuit was the paper trail left by the Aboriginal Control Board and his mother, who attempted numerous times to find out how her son was faring in the hospital. In addition, his legal counsel was able to compare Trevorrow with his three biological siblings who weren't taken from their family. They've lived successful lives, compared to his existence fraught with addiction and identity issues. In 2007, nearly 50 years after being taken from his family, Trevorrow was awarded A$525,000 (equivalent to $447,000 U.S. dollars) in compensation for his suffering [source: BBC News].

Several organizations, including Reconciliation Australia and the Australian Human Rights Commission, are currently in place to advocate for the indigenous people of Australia. The purpose of these groups is to protect the rights of the Aborigines and other groups, ensure nothing like this widespread removal program happens again and fight for the ongoing reparations process.