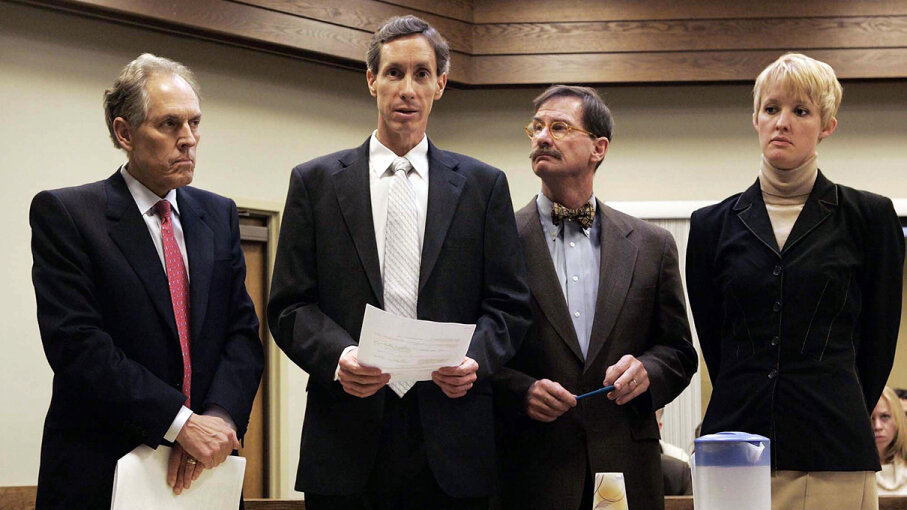 Former FLDS leader Warren Jeffs (seen second from left with his legal council) was convicted in September 2007 on two counts of being an accomplice to rape, related to the arranged marriage and rape of a 14-year-old girl in 2001. The minor-aged bride was awarded a $16 million lawsuit against the group on Sept. 6, 2017. AFP/Getty Images

It seems unthinkable that children are still getting married in 21st-century America. Yet, it's happening in every corner of the country, regardless of state politics, popular opinion or moral leanings. And it occurs more often than we realize, to children younger than we might believe. Perhaps most shockingly, it's happening in ways that are perfectly legal.

"Child marriage is a significant problem in America," Fraidy Reiss, founder and executive director of Unchained at Last, says in an email. Her nonprofit agency promotes social, policy and legal change to child marriage, and helps women escape forced marriages. "It's happening at an alarming rate." According to a recent Unchained at Last study, between 2000 and 2010, in just 38 states, more than 167,000 children as young as age 10 were married — mostly girls to adult men. "The other 12 states don't track the data, but based on the available data, Unchained estimates that nearly a quarter-million children were married in America just between 2000 and 2010," adds Reiss.

The numbers may seem large, but they don't even paint the full, honest picture of child marriage in America. When Frontline requested additional data to compile information from 41 states, it found that 207,468 minors were married in the U.S. between 2000 and 2015. And even that number didn't take into account the fact that states like New Mexico, Arizona and Nevada only keep marriage records at the county level, and nine states didn't provide data at all.

"Up until the last two years when the Tahirih Justice Center and Unchained at Last began to expose and raise the profile of the problem, many people had no idea of the numbers involved, how young girls were being married or how large the age differences could be, or how state laws could permit this to happen," says Jeanne L. Smoot, senior counsel for policy and strategy at the Tahirih Justice Center, a nonprofit that provides legal services, policy advocacy, and training and education to protect immigrant women and girls fleeing gender-based violence. It also and offers assistance to anyone facing or fleeing a forced marriage. "Many of these state laws haven't been changed in decades (or longer), and so many people may have assumed child marriage was a thing of the past in the U.S."

The Laws and Loopholes That Make It Possible

So how is this happening? And why does it continue to happen?

Simply put: The law allows it. "It's legal in every state," Fraidy says. "Most states set 18 as the marriage age, but every U.S. state allows exceptions for children under 18 to marry. In 25 states, the law doesn't specify any minimum age for marriage."

According to a report in Teen Vogue, exceptions in half of the states will serve to lower the legal age of marriage to anywhere from 13 to 17, and exceptions in the other half make it legal for a child of any age to marry if certain conditions are met, like consent of a parent or written permission from a judge.

In Reiss's 2015 New York Times op-ed, she wrote about a common loophole for under-18 marriage: parental consent, which means that 16- or 17-year-old children are allowed to marry in most states if their parents sign their marriage license application. "Of course, one person's 'parental consent' can be another's 'parental coercion,'" Reiss wrote. "But state laws typically do not call for anyone to investigate whether a child is marrying willingly. Even in the case of a girl's sobbing openly while her parents sign the application and force her into marriage, the clerk usually has no authority to intervene. In fact, in most states there are no laws that specifically forbid forced marriage."

Even the courts themselves play a significant part in permitting child marriage. A common state exception allows minors to marry with judicial approval, and as Reiss points out, "judges in those states can allow the marriage even of an elementary school student."

If that scenario seems improbable, consider this: The youngest children to wed in Frontline's 2017 report were three 10-year-old girls in Tennessee in 2001. The youngest boy was an 11-year-old from Tennessee in 2006. Twelve-year-olds were permitted to marry in four states, and 13-year-olds were wed in 14 states. Tahirih conducted a survey in 2011 to find out who U.S. victims of forced marriages were, and they identified victims (both adults and children) from multi-generational American families, as well as immigrant families from at least 56 different countries.

"Several different religious backgrounds were represented among forced marriage victims as well, including Muslim, Christian, Jewish, Sikh, Hindu, Buddhist and others," Smoot says. Why child marriages happen can vary, she says. Children from strict religious families may be married off because their families see it as the only way to prevent sex and pregnancy out of wedlock. Others are from immigrant families where early marriage is the norm. Still other children are simply from poor families who feel they can no longer provide for them, or abusive or neglectful parents looking to sever their obligations.

Hope for Change on the Horizon

The current legal landscape may not have proper protections for children forced into marriage, but some legislators are trying change that. In June 2017, New York Governor Andrew Cuomo signed a bill to raise his state's minimum legal age for marriage from 14 to 18. Prior to this, New York's marriage laws hadn't changed in nearly nine decades. Virginia is another state where things are slowly changing: While 13-year-olds were once allowed to marry if they were pregnant and had parental permission, the law now permits 16- and 17-year-olds who are emancipated to marry, otherwise they have to be 18. In Texas it's also now illegal for children under age 18 to get married, except 16- and 17-year-olds who are legally emancipated from their parents. And no one under the age of 16 can legally marry in Connecticut thanks to a law passed in 2017.

Fifteen-year-old Nasoin Akhter poses for a photo before her wedding to a 32-year-old-man. Both are from Bangladesh, which has one of the highest rates of child marriage in the world.
Allison Joyce/Getty Images

Organizations like Tahirih and Unchained are leading the charge to shed light on an issue many Americans aren't even aware exists. "Child marriage in America was a well-kept secret for a long time, but Unchained is working to change that," Reiss says. Both organizations provide services, including legal representation, emotional support and financial assistance, to the girls forced into child marriage.

In November 2016, Tahirih released a compilation of state laws on minimum marriage age and exceptions, and followed that up September 2017 with an in-depth analysis of those laws, and how they fall short of protecting children.

And while facts and figures on the widespread issue of child marriage in America may be enough to spur some people to act and voice concern, the human side of the story is something Smoot says she hopes isn't lost in the details.

"The real problem with child marriage in America isn't limited to the staggering statistics or the stunning laws — it's the devastating fallout on the rest of a girl's life that can come with marrying too young, for whatever reason," she says. "Like the risk that her education will be cut short, her medical and mental health will be compromised, her likelihood of future poverty will go up and her vulnerability to domestic violence will increase. Add to that the fact that these marriages don't last — up to 80 percent end in divorce — and the compelling public policy reasons to ban child marriage become very clear."

Now That's Sad
Child marriage in America is a significant problem, but it's also a global issue. According to the International Women's Health Coalition, one in three girls in the developing world are married before 18; one in nine are married before the age of 15.