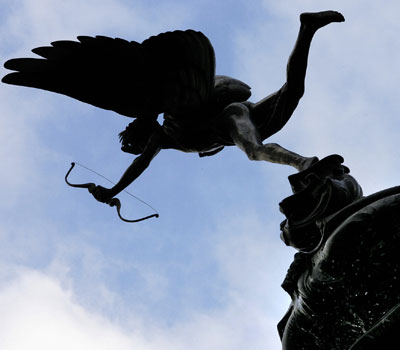 A statue of Eros, the god of romantic and sexual love.
JIM WATSON/AFP/Getty Images

Depending on where you fall in the age-old ardent egghead/hopeless romantic divide, love could be one of two things: It's either a series of electrochemical processes taking place within the brain, or it's the single most important ethereal experience we mere mortals can possibly encounter.

For as long as humans have been able to express their feelings, love has been considered a sacred, instinctual human experience. In Greek mythology, Eros, the god of romantic and sexual love, was responsible for getting earth (Gaia) and sky (Uranus) to hook up, and it was this love connection that gave rise to many of the other gods that followed [source: Encyclopedia Mythica].

When the Romans adopted the Greek pantheon of gods, Eros became Cupid, whom we recognize most often as a chubby little boy with wings and a quiver of arrows at the ready to inspire love in the hearts of mortal and god alike.

Cupid aside, researchers have managed to progressively study love, both as a concept and as a brain function. The 21st century has been a boon for these studies, resulting in several breakthroughs in the examination of how love works.

One field of study has applied itself into the investigation of whether what we call "love at first sight" can exist. In an Ohio State University study, scientists found that people can tell in the first minute or two whether they're interested in a relationship with another person. What's more, after nine weeks, they found that the initial ideas of the potential relationship served as a fairly accurate predictor for how the actual relationship turned out.

Since speed dating is based on a series of brief encounters with a number of people, the basis is actually just a parade of chances to get an initial feel for another person and decide whether or not he or she is worth your time. The goal is not to meet another person to go out on another speed date with. Instead, the goal is to meet someone with whom you would like to go out on a traditional date. In this sense, speed dating serves as a kick-start to regular dating rather than as a replacement for it.

In the next section, we'll examine if speed dating really works. ­­

The Scent of Love?

The ABC News show, "20/20," sent pairs of twins out on speed dates to test whether pheromones (scent molecules humans emit that are believed to attract other humans) might play a role in attraction. Twins were given a fragrance to wear, one with added pheromones, and one without. It was a blind test, so neither twin knew who had been doused in pheromones. The results were positive in favor of the molecules' effectiveness. One female who wore pheromones had nine out of 10 guys say they wanted to see her again. Her identical twin attracted only five of the same men. Not necessarily conclusive, but enough so that some speed-dating Web sites now offer perfumes laden with pheromones -- just in case [source: ABC News].