The Rules of Attraction 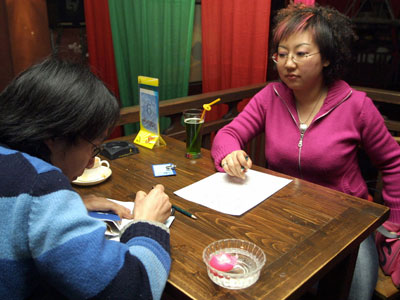 There are many companies that offer speed-dating services and just about as many different techniques. But while some details may change from service to service, the general rules concerning speed dating remain the same.

Speed-dating events are most often held in restaurants and bars, although events are cropping up in other places, like student unions on college campuses. Participants are asked to register ahead of time to ensure an even ratio between men and women, although some services now offer registration at the door. Events cost approximately $30 to $40 per person.

Inside the venue, speed daters will find that tables are arranged to accommodate two participants at a time. One set of the speed daters, usually women, stay seated at the same table, and the opposite group moves from table to table. This table-hopping method has been compared to musical chairs. The difference is, when the bell rings or buzzer sounds, the next seat the dater takes is predetermined. The speed dater progresses from table to table until each participant has had a chance to meet the other.

Depending on the company, a speed date may last from three to eight minutes, although some go as long as 10 minutes. At the end of the date, each dater makes a note if he or she would like to see the other person again. After that, the speed daters move on to the next table, and a new date begins.

The number of dates held in an evening can vary, but most services hold 10 or less. SpeedDating, the original company organized by Yaacov Deyo, holds seven, seven-minute dates in one event. In less than an hour, each person has seven chances to meet the love of his or her life.

After the event, the speed daters turn in their date cards to event organizers. They may be contacted via e-mail the following day, or asked to log onto a Web site to enter the names or ID numbers of people whom they would like to see again. If two speed daters have registered a mutual interest in seeing each other again, the pair receives each other's contact information. From there the couple can contact each other to arrange another meeting or date.

8 Minute Dating, a speed-dating service based in Boston, Mass., maintains the policy that none of their speed daters are allowed to ask for anyone else's last name or phone number. Other services ask speed daters not to discuss what they do for a living or where they live. The idea is for the couple to pursue a connection based on mutual attraction rather than one person doggedly pursuing the other.

Companies like SpeedDating and other, similar companies, including Hurry Date and 8 Minute Dating, can hold different speed-dating events scheduled at the same time in different cities by franchising their services. Events are put on by local organizers on behalf of the company. To this end, most Web sites for speed-dating services have a page dedicated to becoming an event organizer.

In the next section, we'll look at how speed dating can be customized by interests.