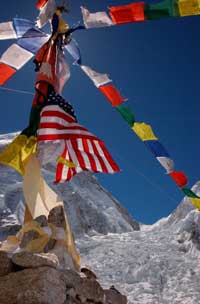 Tibetan prayer flags blow in the breeze at the Mount Everest base camp.
Jake Norton/Aurora/Getty Images

­Although many Nepalese are Hindu, Sherpas practice a form of Tibetan Buddhism. Understanding their Buddhist practices helps one understand their way of life and why the Sherpas are so deeply linked to the mountains. The mountains, particularly Mount Everest, hold spiritual significance as places to come closer to enlightenment. Even the Khumbu valley is referenced in Buddhist literature as sacred.

Tibetan Buddhism emphasizes compassion and selflessness in order to reach enlightenment. It is a pacifist religion focused on the preservation and respect for living things. Although the Sherpas moved into the isolated region in the Khumbu valley, their religious practices continued to flourish as they settled. Local priests, called lamas, and leaders of the priests, called ripoches, served as spiritual guides for the Sherpas. Gradually, their religious practices evolved into more formal rituals and ceremonies.

In 1916, the first celibate monastery was established by Lama Gulu in Tengboche. The Tengboche monastery, set 12,700 feet (3,870 meters) aloft, is a spiritual landmark for the Sherpas, with a school and nunnery affiliated with it. More than 30,000 tourists visit the Tengboche monastery each year because of the striking geography and the religious festivals. The popular festival of Mani Rindu culminates in a masked dance ceremony that displays the colorful aspects of the Sherpa's religious culture, celebrating 10 days of prayer to the Buddha of compassion.

Indeed, compassion is central to the Sherpa religion and their way of life. Many Sherpa homes contain religious shrines to which they pray and present daily offerings. Outside, visible symbols of Buddhism dot the footpaths and landscape. Mani walls, which are stones engraved with mantras, or short prayers, of transcendence, remind Sherpas of their journey toward nirvana. Chodens, or religious shrines, are also common milestones along the trials, often wrapped in the strands of Tibetan prayer flags.

This religious background explains much about the differences between the Sherpa mindset and the Western approach to mountaineering. To attain enlightenment, Buddhists must not perform religious acts for their own sake, but rather for others. This selflessness translates into the Sherpa profession of guiding the climbers and sometimes sacrificing their own safety for others. Many Sherpas also do not view the goal of reaching the top of Mount Everest as a means of personal glory likely because it goes against the grain of their religion [source: Neale]. Instead, as we saw with the earlier quote from Tenzing Norgay describing Mount Everest as a "mother hen," the summit of the mountain is merely a way to draw closer to the Buddhas [source: Tenzing]. For that reason, Norgay and other Sherpas have left offerings to the gods at the top Everest.

As the ancient traditions of Sherpas collide with the Western influence that tourists have brought in, many question the future of the Solu-Khumbu region. On the next page, we'll examine the fate of the Sherpas and their culture in the 21st century.

Amid the browns and grays that dominate the Himalayan terrain, bright Tibetan prayer flags provide welcome splashes of color. But they aren't hung for decorative value. The square flags are blue, white, yellow, red and green to represent the five Buddha families. Inscribed with mantras and spiritual symbols, they are meant to spread blessings of compassion, love and peace across the wind. The flags also remind Sherpas of the Buddhist teachings and open their mind toward continued enlightenment.