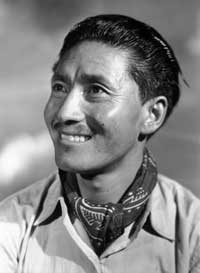 In the eyes of the world, Sherpas are indelibly connected to Mount Everest. But their relationship with it contains interesting contradictions. On one hand, they respect it as a deity, calling it Chomolungma, loosely translated "Goddess Mother of the World." On the other, they have experienced the material benefits of the Western obsession with conquering it.

The Hillary-Norgay summit in 1953 opened the floodgates for tourists to pour into the Khumbu valley. Norgay actually worked as a porter and a guide for more than 18 years before the successful expedition. That trek, called the British Everest Expedition, began as a group of 400 people and slowly whittled away to just Hillary and Norgay. With Tenzing Norgay, the Sherpas suddenly had an international face and reputation as being the best of the best for Himalayan mountaineering.

Norgay's reaction to reaching the peak of the world reflects the Sherpa perspective on Mount Everest and how it relates to their lives. He described it as "warm and friendly and living," comparing it to a "mother hen" [source: Tenzing].

Many Sherpas have strived to maintain this type of respect for the mountains because of the life force it possesses. Although they understand that tourists want to attain the personal glory of reaching the top, some Sherpas have grown disheartened from what they feel is a cheapening of the Everest experience [source: Tenzing]. Since the 1953 summit, more than 2,250 people have reached the top of the mountain, often with Sherpa help [source: Everest History].

However, the majesty of the mountain does not come without its share of danger. Being a Sherpa guide on Mount Everest expeditions carries a high risk of severe injury or death. Although specific counts vary, people estimate that about a third of the Everest fatalities have been Sherpas [source: Reid and Kendrick]. In addition, the publicity that Westerners receive for their summits far overshadows that given to Sherpas. Following the Hillary-Norgay summit, for example, New Zealander Hillary received a knighthood, while Norgay only received an honorary medal.

But as you'll see in the next section, many Sherpas aren't concerned about the lack of acknowledgement for their incredible mountain skills. Instead, the deep roots of their religious beliefs play a far more significant role in their lives than the secular praise heaped on successful climbers.