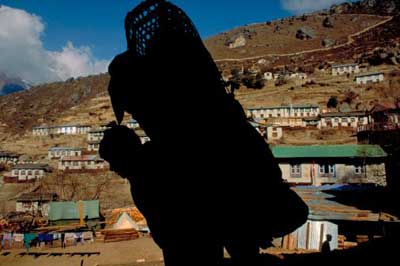 Because of the absence of vehicles, many goods are transported on the backs of porters.
Robb Kendrick/Getty Images

Sherpas lead a utilitarian existence, with many surviving through trade and subsistence farming. Wheat and potatoes are the leading crops, and some raise yaks as well. With both farming and herding, Sherpas often move between multiple small stone huts in the highlands and lowlands, depending on the season. They can then trade these goods for other necessities.

As we'll discuss in more detail later, tourism is the most lucrative economic trend for the Sherpas. While a majority of Sherpas do not work with trekking and expedition companies, those specifically in the elevated Khumbu valley have profited the most from it.

One of the most remarkable aspects of Sherpa life is the absence of wheels. Because of the treacherous landscape, almost no wheeled transportation exists in the Solu-Khumbu region, not even wheelbarrows. Instead of roads and automobiles, Sherpas get from place to place on foot paths. That means that whenever they need to transport anything -- such as firewood, produce or building materials -- it goes on their yaks or their backs. Many Sherpas, especially poorer ones, become accustomed to bearing heavy loads from a young age, hauling their families' cargo or working as porters for wealthier people.

Some Sherpas also earn extra money as porters on mountain climbs, sometimes carrying more than 100 pounds (45.3 kilograms) up the trails. Wide mouth baskets with a strap called a trumpline that goes across the forehead contain the cargo. The trumpline takes some of the load weight from the back, transferring it to the neck. Walking sticks also help ease the burden.

The Sherpa's ability to perform such strenuous labor in higher altitudes with less oxygen has been a perplexing phenomenon for scientists. While most visitors to the region would suffer from altitude sickness, or hypoxia, due to lack of oxygen delivered to tissues, Sherpas' bodies are acclimated to it. In fact, some Sherpa have summited Mount Everest without the additional supply of oxygen that is standard issue on most climbs. Although the precise reason why they are better adapted has not been pinned down, studies have revealed that some Sherpas may have slightly more hemoglobin in their blood that transports oxygen to the tissues to fuel metabolism compared with people who live at sea level. Evidence also suggests that Sherpas' bodies absorb oxygen into their blood more efficiently as well. To learn more about high-altitude survival, read How do Tibetans avoid altitude sickness?.

Sherpas speak a Tibetan dialect rather than the national Nepali language and have no written language. Until the 1960s and the funding, from Edmund Hillary's foundation, little to no formalized education existed in the area. Hillary's Himalayan Fund charity built 30 schools in the Solu-Khumbu region. But today, some schools have fallen into disrepair and suffer from low attendance because most students must trek long distances to get to school.

Health care is also a challenge. Thankfully, Hillary's foundation also funded an airstrip and hospitals in the remote area that have brought modern medicine and dentistry to the villagers. The Kunde Hospital, for example, offers free health care for Sherpas and is staffed by both permanent and volunteer doctors.

Next, we'll back up for a moment and examine the history of the Sherpa people and the significant events that brought them where they are today.

Sherpa women have an important role in daily life, caring for the children and performing a large share of any farming or yak herding the family does. If a woman's husband is a porter or guide, she will take over as head of the household during expeditions.