Warning: If the idea of a tattoo artist sticking a hypodermic needle filled with ink into the white of someone's eyeball really, really grosses you out, you probably should skip the rest of this article and read something a little less unsettling. (The Baby Animals Quiz, for example).

OK, you're still reading, so you must not be that squeamish. So here we go. In a society where body modification increasingly has become a mainstream practice, it's getting harder to truly stand out. There was a time, a few decades ago, when merely having a torso covered with Japanese criminal-style tattoos or a metal stud through your lip would brand you a notable nonconformist. But after athletes, fashion models, college kids and just-divorced women started getting inked in the mid-1990s, you could tell that "body art" had gone mainstream.

A 2012 Harris poll found that 21 percent of American adults have a tattoo, including 38 percent of those between the ages of 30 and 39 [source: Harris Interactive].

That means tattoos don't really cut it for someone who really wants to stand out. Some turn to the ancient practice of scarification, cutting or branding their skin to display designs. But even that might not be outré enough. In 2007, a few particularly daring body-modification enthusiasts experimented with having the sclera — the white, protective outer layer that extends from the cornea to the optic nerve —injected with ink. While eyeballs had been tattooed before to conceal scars or injuries, this was the first time that it was done for cosmetic purposes [sources: Positano, MedlinePlus]. The procedure transformed the whites of their eyes into colored orbs with an otherworldly effect.

Since then, at least a handful of other people have gotten similar scleral tattoos. BME.com, a Web site for body modification enthusiasts, has published pictures of subjects with orange, red and green eyeballs [sources: Larratt, Larratt]. The Mirror, a British tabloid, reported that a 33-year-old man named Matt Whelan, who was billed as "Britain's most tattooed man," had the sclera around one of his brown eyes tattooed black [source: Fricker].

If scleral tattooing sounds kind of "out there" to you, well, it is. It's also extremely dangerous, medical authorities warn. Yet people do it anyway. In this article, we'll discuss the how and why.

How Exactly Do You Tattoo an Eyeball, Anyway?

The notion of a needle in the eye seems pretty horrible to most people.

In reality, though, doctors routinely give injections in the eye to deliver medicine to places where eyedrops can't reach, and they say that patients generally don't find it too painful, even though the sclera has nerve fibers in it [source: Kershner]. They lessen the discomfort by applying drops containing a chemical to numb the eye, and then inject a small amount of anesthetic into the eye itself before giving a deeper injection containing the actual medicine [source: Retina Eye Specialists]. In the late 1800s and early 1900s, eye doctors routinely injected ink into patients' eyes to cover up disfiguring corneal scars, though the practice pretty much was rendered obsolete by modern advances in reconstructive surgery [source: Pitz et al.].

Even so, getting a needle poked into your sclera, the protective outer layer of the eye, doesn't sound like something a person would choose to experience. That is, unless you're a hardcore tattoo buff who is used to enduring a little pain in order to look different from everyone else.

At a 2007 body-modification convention in Canada, three people actually volunteered to undergo a public experiment in which they had their eyes injected with ink by tattoo artists. (Doctors reportedly were consulted for advice, but none were willing to perform the procedure). The subjects used anesthetic drops to numb themselves beforehand, and it reportedly didn't hurt too badly afterward, though there was some discomfort [sources: Positano, Larratt].

The first subject tried a traditional "hand-poked" method, the process that tattoo artists used to put ink under the skin before modern electric tattoo machines. That turned out to be so cumbersome that it took 40 pokes to get the ink into the eye. After that, the experimenters switched to using a hypodermic needle, which turned out to work a little more efficiently. Even so, as one subject, Shannon Larratt, duly noted, "It is extremely difficult to get the needle into the right layer." Aftercare, he added, was antibiotic drops and a patch [sources: Positano, Larratt].

How About Tattooing an Entire Eye?

Back in 1903, an eye surgeon actually tattooed a fake pupil onto the all-white eye of a Wyoming man named William Summers, who had lost the sight in that eye as a child due to exposure to poison ivy. The surgeon told a newspaper that it wasn't any more difficult to tattoo an ersatz eye than it was to ink an anchor or a ship on a person's arm [source: Ellensburgh Capital].

Why Would Anyone Want to Get an Eyeball Tattooed?

When people get tattoos on their skin, it's possible to create intricate, finely crafted drawings. But when you inject ink into your sclera, you're just staining the white of your eye. Shannon Larratt, who participated in the initial 2007 experiment, wrote that the goal was "to eventually fully fill in the white of the eye with blue" [source: Larratt].

But that leads to another question. Why would anyone want to have a sclera of a different color – and at such a risk? Lane Jensen, publisher of Tattoo & Piercing Magazine, tried to explain it to the New York Post in 2007: "It's trippy — and definitely starts some interesting conversations" [source: Positano].

Larratt explained in a later blog post that he wanted his eyes to resemble those of the Fremen, characters in science-fiction novelist Frank Herbert's "Dune" series. He described the result as "both subtle and extreme, in an effect that's completely alien, yet maintains its humanity and is almost even normal." People who notice his scleral tattooing "seem unsure of what they're seeing, whether it's natural, or a trick of the light, or something induced" [source: Larratt].

But Larratt doesn't encourage other people to rush out and get eyeball tattoos. Though he's undergone repeated scleral tattooing and so far hasn't suffered any significant ill-effects, he nevertheless warns that this permanent procedure is "high risk" [source: Larratt].

In an FAQ, he mentions that some subjects have experienced persistent pain "similar to a throbbing headache that never goes away" and sensitivity to light, and the sensation of having something caught in their eye. Injecting too much ink into the eye can also cause the sclera itself to break down and flake off into the vitreous humor, the interior of the eye. The result could be "floaters," annoying spots in a person's vision, or in a worst-case, loss of the eye itself [source: Larratt].

Dr. Douglas Meier, a Portland, Ore.-based ophthalmologist, took a similarly dim view of the practice in the Digital Journal. He noted that someone at working at home wouldn't have the medical knowledge or equipment to carry out the procedure safely [source: Hartman].

I got my left ear pierced back in the early 1990s, for what probably seems like an odd reason: My wife and I had just gotten married, and we were either too frugal or too broke— I forget which — to buy gold wedding rings. And I'm a bit absent-minded, so I was certain that if I got a ring, I'd inevitably leave it in a gym locker room or on the hotel nightstand (I traveled a lot in those days). So instead, she and I went to the Piercing Pagoda at the local shopping mall and split the $25-a-pair gold ear stud special as a symbol of our love. I soon acquired a variety of ear studs and rings, including a ceramic yin-yang symbol, a gold peace sign, and my favorite, a silver skull dangling from a chain that my wife fashioned for me from stuff she bought at the local bead shop.

Having an earring was kind of a gateway drug for me, and pretty soon, I was sporting other affectations of nonconformity. I traded in my foreign correspondent-style raincoat for a black biker jacket and a beret, and grew a ponytail and a chin beard that I imagined made me look as cool as Dave Navarro, the guitarist for the then-popular alt-rock band Jane's Addiction. I contemplated getting a barbed-wire band or Chinese characters tattooed on my arm as well, but I never quite could go through with it—in part because of a fear of getting some infectious disease from the needle, in part because I was concerned about how silly it would look someday when I was an old man playing shuffleboard in a trailer park in Sarasota. 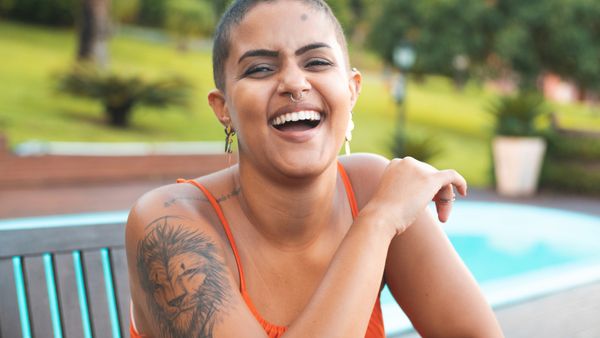 Up Next
How Animated Tattoos Work
Explore More 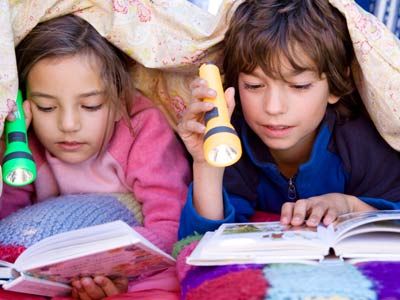 You May Like
Does reading in dim light really hurt your eyes?
Explore More 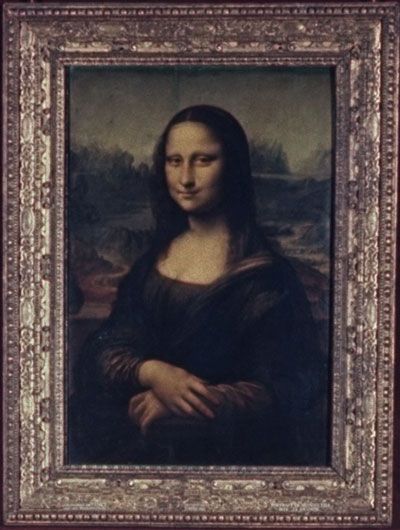 Keep Reading
Why do the eyes in paintings seem to follow you sometimes?
Explore More