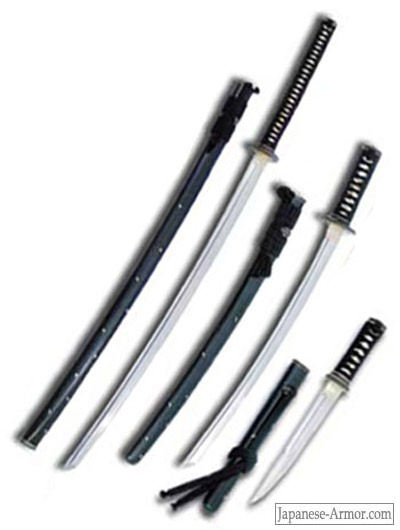 The most famous weapon of the samurai throughout history was the katana, a curved sword. A katana was never worn without its companion sword -- the wakizashi, a shorter weapon with a broader blade. According to the online encyclopedia Wikipedia, together the two swords are referred to as daisho, meaning "large and small." The word dai (large) represents the katana and the word sho (small) represents the wakizashi.

The smiths who created katana for the samurai are widely regarded as the finest sword makers in history. One of the biggest problems in making a sword is keeping it sharp. A weapon made with a hard metal will keep its edge, but will be brittle and prone to breaking. Japanese smiths solved this problem by making the core of the sword with a soft metal that wouldn't break. This core was then covered with layers of harder metals that were repeatedly folded and hammered until there were literally millions of layers of metal laminated together. The edge was so sharp that a skilled swordsman could slice a human in half with one blow.

In addition to swords and bows, samurai used a variety of pole arms (bladed weapons attached to long poles). One of the more common Japanese pole arms was the naginata, which consisted of a sharp blade two to four feet (.6 to 1.2 meters) in length mounted on a wooden shaft that was four to five feet (1.2 to 1.5 meters) long. The extra reach afforded by these weapons allowed infantry to hold attackers at bay, or make a first strike before an attacker with a sword could reach them. They were also very effective against mounted opponents.

In the 16th century, European traders arrived in Japan for the first time. The Japanese paid large sums for their matchlock guns, quickly mastering the smithing techniques needed to mass produce the weapons. Although the gun is not traditionally associated with samurai, it was a major influence on Japanese warfare from that point on, allowing daimyos to raise large armies of relatively untrained men armed with cheap guns. Many samurai adopted the unreliable weapons, which were best used as a backup to the more trustworthy sword. Some even wore solid-body-design plated armors, okegawa-do, intended to be bulletproof.

Special thanks to Japanese-Armor.com, makers of replica arms and armor, for providing photos used in this article.